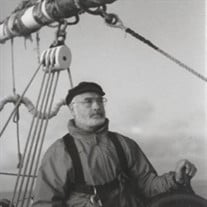 Gilbert Klemme Bovard, age 93, of Clear Lake, Iowa, passed away on November 23, 2020 due to complications of the Covid virus. He practiced law in Mason City, IA for 31 years. In 1983 he was appointed to the Iowa District Court and served on the bench for 22 years retiring in 2005. The Honorable G. K. Bovard enjoyed every minutes of his judicial service. He was born in Pasadena, California in 1927 to Gilbert Simpson Bovard MD and Ruth Klemme Bovard. His grandfather, William Bovard, was the Secretary General of the United Methodist Church. His paternal great uncles, Marion McKinley Bovard and George Finley Bovard, were the first and fourth presidents of the University of Southern California. Gil's father contracted tuberculosis, which in 1930 had no effective treatment, so at age 3 it was believed safer for Gil to live with his maternal aunt and uncle Ralph & Jessie Stanbery in Mason City, Iowa. He saw his biological father once more before Dr. Bovard died in 1936. Gil graduated with honors from Mason City High School (MCHS) in 1945, served at the Great Lakes Naval Station, and attended the University of Minnesota 1946-7; he remained a Gopher fan all his life. He completed his undergraduate education at Pomona College in California in 1949. He played football for the Pomona “Sage Hens” and was an extra in the John Derek film “Saturday’s Hero”. He attended law school at the University of Iowa from 1949-51, married Eugenia “Genie” Ouren Ulvestad and returned to Mason City to practice law. They raised four children who in turn graduated from MCHS between 1971-76. Gilbert was a Methodist lay minister, a member & president of the Lion’s Club, the Masonic Temple, president of the MCHS School Board for 12 years, and received the class of 1945 Distinguished Alumni Award in 2003 for his community service. In receiving the award, he said: “Be proud of what you do and the way you do it; be true to yourself and you will fail no man.” Gil was nicknamed The Old Crow, as long-time editor of the Clear Lake Yacht Club (CLYC) newsletter “From the Crow’s Nest”. He was an accomplished sailor, served as a race judge and as commodore of the CLYC. He played flute in the Mason City Meredith Wilson Band with wife Genie accompanying on glockenspiel! He made elaborate stained-glass windows and had a photographic darkroom. Gil was an Eagle Scout & an Air Scout, and piloted small aircraft into his 60’s. He admired his son Doug who flew Cobra helicopters as a US Army Warrant Officer. Gil was an outstanding athlete. He earned his black belt in judo at age 40. He played rugby on the River City State Championship team in 1981 with men half his age, continued competing until he was 55 and then refereed until he was 60. With nothing else to do, he picked up ice hockey as a goalie in the men’s over age 30 league and played until age 78. He wind-surfed 6-wks after a knee replacement, and rowed in a single-shell scull on Clear Lake most summer mornings 5:30-6:30 am until nearly age 80. At age 72, he swam in the 1999 US Masters Swimming National Championships at the U. of Minnesota Aquatic Center and teamed with his three sons to place 9th in the 200-meter medley relay [under 60 age division!] swimming the final freestyle leg. He was a top-five finisher in several events at the Canadian national swim meet in Toronto in 2003. He skied and completed the 50-kilometer American Birkebeiner Nordic ski race twice training only on the flat Iowa terrain. His doctor once said: “Gil, there are some guys in their 70’s who are 90, and others who are physiologically 50. You’re 48.” Judge Bovard was a wordsmith, an inspiring orator, and an intimidating debater. He was a maestro of the cribbage board. He loved to recite “The Jabberwocky” by Lewis Carroll and Kipling’s “The Ballad of East & West”. He had difficulty saying “I love you” out loud, but always signed his letters “Love, Dad” or “Hang by yer thumbs” which was his euphemism for the same thing. As his children headed off to college, he began to write a multi-page epistle that he named “The Blatt” (“a newspaper” in British parlance) on yellow legal paper every Sunday night for nearly 40 years. Dad savored life… but he was ready for the next journey. On November 23rd, at the hour he used to rise to go rowing at dawn, he slipped his mooring and set sail for that distant unknown shore. He was an exemplar of the life well lived. Life is tenuous; live without regrets: “One breath in, one breath out…that is all we be.” Judge G. K. Bovard was preceded in death by his dear wife Genie. He is survived by his children Ralph Bovard (Marnie Wells) -Minneapolis, MN, Sally [Bovard] Tye (Joe) -Solon, IA, Doug Bovard (Victoria) -Show Low, AZ, & Scott Bovard (Laura) -Missoula, MT, and grandchildren Annie Tye, Doug Tye, Gillian Bovard &Andrew Bovard (Ashley) and great grandchildren Ella & Torunn Bovard. A celebration will be held in the future when all can gather safely. Memorials to: The Gilbert & Eugenia Bovard Scholarship: c/o Education Foundation of Mason City Public Schools, 1515 S. Pennsylvania Ave, Mason City, IA 50401 Clear Lake Enhancement and Restoration Project: (641) 357-2200: www.clearproject.net Clear Lake Sailing Center: (641) 357-8001- www.clycss.com/donate/ Clear Lake Arts Center: (641) 357-1998; www.clearlakeartscenter.org/support/donate A special thank you to his home caregivers, the Country Meadows staff, and the Mercy Hospital 5W nurses & physicians who cared for him in his final days. Bless you all! “Men do not quit playing because they grow old; they grow old because they quit playing.” Oliver Wendell Holmes

Gilbert Klemme Bovard, age 93, of Clear Lake, Iowa, passed away on November 23, 2020 due to complications of the Covid virus. He practiced law in Mason City, IA for 31 years. In 1983 he was appointed to the Iowa District Court and served on... View Obituary & Service Information

The family of Gilbert Klemme Bovard created this Life Tributes page to make it easy to share your memories.

Send flowers to the Bovard family.