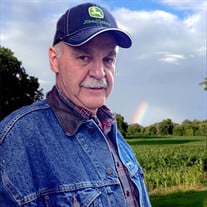 Gerald John Schwade, 76, of Nora Springs, passed away Wednesday, May 4, 2022 at the Muse Norris Hospice Inpatient Unit in Mason City after a courageous three and a half year battle with pancreatic cancer. He was a fighter until his final day. Gerald and his twin brother, Gene, were born August 4, 1945 to Eleanor (Baack) and John Schwade. Jerry went to school in Nora Springs and Plymouth. He received his GED when he was 50 after receiving a scholarship from NIACC. Jerry was discharged from the Army as an E5 (Buck Sergeant). He served from June of 1966 until June of 1968 along with his twin brother, Gene, and was stationed in Germany. Once he returned from the service he worked for Jack Helgren at North Iowa Tire, and the Volkswagen dealership, then Carl Woollums asked he and Gene to come and work at Woollums Implement. Jerry worked there for 27 years, which would eventually be known as Brakke Implement, and an additional 10 years with Ruan Transport until its closing in 2010. In 2010 Jerry and Gene opened a shop in Nora Springs where they worked on tractor repair. They worked together until the shop’s closing in 2018 after Jerry received his diagnosis of pancreatic cancer. While working for Woollums Jerry also farmed 360 acres on the Alice and Ray Gruben farm for ten years. He helped his younger brother, Don, farm 1200 acres as well. Many mornings he was up at 5:00 am to work at Woollums and then home for supper before heading out to the field until midnight, all to do it again the next day. After Jerry retired from farming, he and his family moved to an acreage in Nora Springs. Jerry developed pancreatic cancer in late 2018. Due to the rarity of his cancer he was unable to have the Whipple procedure. He first received chemotherapy which he didn’t respond to, and then radiation and chemo pills for five weeks which staved the cancer for 18 months. During these treatments he and Kathy stayed at the Hope Lodge in Rochester during the week and returned home on the weekends. The Hope Lodge was a God send. During this time Jerry and Kathy met many good people and formed great friendships, many of whom were fighting the same battle. Eventually Jerry’s tumor began growing again so he again began another round of chemotherapy. He fought hard to stay with us and his nurse practitioner, Mindy, called him a Miracle! Jerry and Kathy were blessed with the care of many dedicated health care workers at the VA Clinic in both Mason City and Des Moines, and a special thanks to our attending physician, Dr. Laura Brunsen; they have all been a great blessing to Jerry and our family. Our heartfelt thanks to all the providers at the Mayo Clinic in oncology, radiology, and our nurse practitioner, Mindy Hartjer; as well as the staff at MercyOne North Iowa Cancer Center and Hospice of North Iowa. Those grateful in sharing in Jerry’s life are his wife, Kathy; Nora Springs, IA; son, Jeremy Schwade, Mason City, IA; grandson, Gabriel Stokke, Longmont, CO; siblings, Betty Sheriff, Des Moines, IA, and his twin, Gene Schwade, Mason City, IA; many nieces, nephews, and cousins, as well as extended family and many friends. Kathy is very grateful for the encouragement and support given by so many family and friends; they’ve been a tremendous support. God Bless them all! Jerry is preceded in death by his parents, John and Eleanor Schwade; brother, Don Schwade, who also battled cancer; maternal grandparents, William and Elizabeth (Stromer) Baack; and paternal grandparents, Willie and Ella (Bohnsack) Schwade. A funeral service will be held 11:00 am Wednesday, May 11, at Hogan Bremer Moore Colonial Chapel, 126 3rd St NE, Mason City with Pastor Steven Buss, of Rochester, MN officiating along with a eulogy being delivered by brother in law, John Young. Burial will follow in the Park Cemetery, Nora Springs, where a graveside committal will be led by Pastor Steven Buss, with a prayer provided by brother in law, Brian Young, and military honors conducted by members of the Nora Springs, IA American Legion. Jerry’s family will greet relatives and friends from 9:00 am until the time of his service on Wednesday at the funeral home. In lieu of flowers and customary remembrances, memorials may be left in Jerry’s honor to the Hope Lodge of Rochester, MN, Hospice of North Iowa, or the National Pancreatic Cancer Foundation.

Gerald John Schwade, 76, of Nora Springs, passed away Wednesday, May 4, 2022 at the Muse Norris Hospice Inpatient Unit in Mason City after a courageous three and a half year battle with pancreatic cancer. He was a fighter until his final day.... View Obituary & Service Information

The family of Gerald J. "Jerry" Schwade created this Life Tributes page to make it easy to share your memories.

Send flowers to the Schwade family.