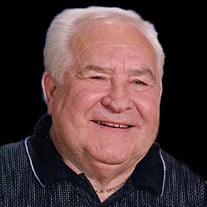 Gerald Lee Schultz, 83, of Clear Lake, died Monday, November 23, 2020, at MercyOne North Iowa Medical Center in Mason City. A private graveside service will be held Monday, November 30, 2020, at Clear Lake Cemetery, where military honors will be provided by the Clear Lake VFW Post 4868 Honor Guard. Memorial contributions may be sent to the family at 1618 Poplar Pl., Clear Lake, IA 50428. Gerald was born June 29, 1937, the son of Carl and Mary (Burton) Schultz in Red Oak, IA. He was raised in Mason City and graduated from Mason City High School in 1956. On June 30, 1957, he married Karen Hanley at the Little Brown Church in Nashua. After accepting a position with Great Lakes Pipeline, Gerald and Karen moved to Chippewa Falls, WI, Superior, WI and Cloquet, MN. Following an invitation to join the United States Army in 1960, he moved to Germany and returned home in 1962. Gerald rejoined the pipeline and also decided to relocate to rural Superior where he began raising mink and fox; which he continued for 38 years. In 1966, they welcomed a son, Stuart. Throughout his life, Gerald met buyers from all over the world as well as several ranchers from the U.S. and Canada. He retired from the pipeline in 1979. As if their schedules weren’t full enough, Gerald and Karen began selling feed to dog mushers. Their property became known as Sled Dog Central because mushers from all over would visit and even stay. They would always leave with a full stomach though. The family returned to Clear Lake in 2002. Gerald was never one to go to other people’s homes, but always enjoyed entertaining at his. He never missed a chance to chop, peel and even eat. He had his group of ladies to help, and together, they had a lot of fun. Gerald was a member of the Acacia-Itasca F&AM in Superior, WI and Clear Lake VFW Post 4868. He loved to hunt, fish, ice fish and trap. Some of his favorite memories were fishing trips to Alaska. Left to cherish his memory is his wife of 63 years, Karen Schultz of Clear Lake; son, Stuart Jon; brother, Richard (Marge) Schultz of Riceville, IA; sister, Phyllis (Steve) Mutziger of East Moline, IL; sister, Karla Schultz of Riverside, CA; cousin George (Minnie) Cramer of Alden, IA; sister-in-law, Shirley Zinn of Joplin, MO; and several nieces, nephews and friends. Everyone that visited the house he considered family and was always happy to see them. He was preceded in death by his parents and nephew, Steven Schultz. Gerald would appreciate ending with “Don’t be a stranger.” just as he did many conversations over the years.

The family of Gerald Lee Schultz created this Life Tributes page to make it easy to share your memories.

Send flowers to the Schultz family.