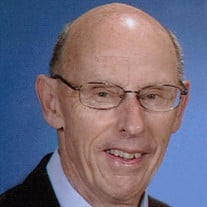 Gerald D. “Jerry” Cory passed away peacefully at home on April 18, 2021. He was born November 20, 1933 in Dubuque, Iowa, and adopted as an infant by L. Dale and Gladys (Nelson) Cory. Jerry grew up in Mason City and graduated from Mason City High School In 1951 and Mason City Junior College in 1953. He served in the US Army from 1953 to 1955 and was stationed in Panama to guard the canal. He went through jungle training and learned Morse code. Jerry was well known as a tennis player and was once called in from the field to play on the Army’s team for a tournament. He followed multiple sports, especially enjoying the Minnesota Twins and Vikings and all three Iowa university teams. Jerry was an avid tennis player, having started in his teens and playing regularly for over 60 years. He was a founding member of the North Iowa Tennis Club which provided indoor tennis for years. After retirement, Jerry took up golf and enjoyed the camaraderie it offered beyond his tennis playing years. He was always physically active, enjoying hikes at Lime Creek Nature Center, bike riding, cross country skiing, Earth Day clean-ups and lots of Nerf football games with his family. These activities took place after walking over 10 miles a day as a postal carrier. His other outdoor enjoyment was fishing, and he held fond memories from his 24 years of trips “up north” with his buddies. Jerry enjoyed his work as a mail carrier for 34 years, enduring all types of weather. On his first day of training, he “impressed” his trainer when mail from his bag accidentally fell into the sewer grate. For years he was dropped off with his mail cart on his route. The cart was popular with kids who enjoyed rides as he pushed it along. Many caring people allowed him to warm up in their houses on winter days and offered him lemonade on warm days. Thankfully, the postal service moved to carrier driven mail trucks in the early 1970’s. He stayed with the same two routes for the majority of his years, getting to know the households that he served. After retiring from the postal service at age 59, he thoroughly enjoyed his post-retirement, part-time jobs. One job was working for Artz & Merritt Sporting Goods, where he enjoyed sales, rebuilding fishing reels and joking with his co-workers. The other was picking up donated materials from local businesses for the North Iowa Area Education Agency. Jerry was married June 1, 1957 in Mason City to Virginia Vala. They raised a family of five: Steve, Mason City; Carlyn (Mike) Vanderheyden, Apple Valley, MN; Kathleen (Mike), Clear Lake; Brian, Cedar Rapids; Susan Cory and Jeff Kuker, Des Moines. Jerry is survived by his wife of 63 years, Virginia; his five children; grandchildren; Rob (Brianna) Thul, Amy Thul, Ryan (Danika Gump) Thul, Aaron (Ashley) Batten, Evan (Kelly) Batten, Regen Kuker, Rory Dolan and great-grandchildren, Cora Thul, Lark Thul, and Emilia Thul. He is also survived by his sister, Joann Wright and several nieces and nephews. He was active in Holy Family Church as an usher, sacristan, collection counter, member and president of the church Men’s Club, and was a singer in the choir for 30 years. He hosted and participated in church study groups with Virginia in their home. He served on the Holy Family and Newman High School boards and was a member of the Knights of Columbus Council 1006. For 20 years he was dedicated to his volunteer role as treasurer for St. Vincent de Paul Society, helping those in need. In addition, Jerry served with the Mercy Hospital Ambassadors for over 20 years. Jerry loved listening to music and singing. His talents stretched to the stage, playing his look alike role of the “American Gothic” farmer in “The Music Man” for Mason City Community Theatre. In general, he loved spending time with his wife of nearly 64 years, family, close friends and neighbors. He and Virginia had a long and loving relationship. They enjoyed their friends and community. Jerry was a father who always took care of the needs of his family and was always present. He was preceded in death by his parents; in-laws, Louis and Sarah Vala; son-in-law, Dave W. Batten; and daughter-in-law, Joan Cory. Visitation will be held Thursday, April 22, 5-7 p.m. at Hogan Bremer Moore Colonial Chapel. A Funeral Mass will be held Friday, April 23, 10:30 a.m., at Holy Family Catholic Church of Epiphany Parish, 722 N. Adams. An inurnment service will be held for family at Elmwood-St. Joseph Cemetery, Mason City, the same day. Facial coverings will be required and social distancing practiced. Jerry’s Mass will be live-streamed via the Epiphany Parish Facebook Page, https://m.facebook.com/EpiphanyParishMasonCity/ or through the parish website, https://epiphanyparish.org/ In lieu of flowers and customary remembrances, memorials may be left in Jerry’s honor to Epiphany Parish, Mercy One North Iowa Hospice or to the family, who will disperse to other charities important to Jerry. The family thanks Rob Grayson and Tracy Grooters, MercyOne North Iowa home care for their support and care.

The family of Gerald D. "Jerry" Cory created this Life Tributes page to make it easy to share your memories.

Send flowers to the Cory family.