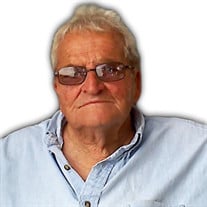 George C. Lunn, 88 of Clear Lake passed away Thursday, May 23, 2019 at MercyOne, North Iowa Medical Center. A funeral service will be held 11:00 a.m. Friday, May 31, 2019 at Zion Lutheran Church, 112 N 4th St, Clear Lake, IA with Pastor Al Berg officiating. Burial will be held in Clear Lake Cemetery, Clear Lake, IA. Visitation will be 5:00 p.m. to 7:00 p.m. Thursday, May 30, 2019 at Ward-Van Slyke Colonial Chapel, 101 N 4th St, Clear Lake, IA. Visitation will continue one hour prior to the funeral at the church. Memorials may be directed in care of the family to be donated in George's name. George Christian Lunn Jr. was born just north of Clear Lake on a farm to George Christian Sr. and Alma (Osnes) Lunn on June 19, 1930. He had a one older sibling, his sister Lois. He gave his life to the Lord when he was baptized at Zion Lutheran Church in Clear Lake, Iowa as a baby. Growing up he was involved with the family farming with milking cows along side his father. The family moved to the current home on Buddy Holly Place where George lived the rest of his life. George and Betty met each other in kindergarten. When Betty moved back to the area for her senior year they reconnected. George and Betty (Hoffman) were united in marriage on December 19, 1948 at the Zion Lutheran Church and have spent the last 70 years together. To this union they were blessed with four children: Tim, Rick, Jerry and Kathleen. George continued his farming career involving his 3 sons to learn the trade. Besides farming he worked at the Sugar Beet, Felco and helped with the I-35 paving project for the Duesenberg excavating company and finally at Winnebago Industries where he worked for 26 years until his retirement. In his retirement years he could not stand being idle and eventually began working at Liquid Grow as a driver and Menards as a gate guard. George and Betty took their young family on family vacations and continued this passion in their retirement years in their RV traveling around the country. During the winter months they would spend time in Arizona, Florida, Texas or California. In his adventures of traveling he would try to spot someone that he knew whether it be local or across the country. He was a man that you would love to meet and made many friends during his 88 years of life. He loved his gardening during the summer months and consuming his crops during the winter. He spent countless hours mowing in his own way. The yard would be mowed in sections, but always ended up looking good in the end. Holidays were special to him with gathering with the family and making special times to remember. Throughout the years he had numerous pets that he cherished very much. He always had a dog at his side, most recent his yellow lab, Marley. Left to cherish his memory is his wife of 70 years, Betty; sons, Tim (significant other, Debbie) Lunn of Mason City, Rick Lunn of Clear Lake, daughter-in-law, Lea Ann Lunn of Clear Lake and daughter, Kathleen (Dan) Anderson of Swaledale; grandchildren, Morgan (significant other, Jeff ) Lunn, Ashley Lunn, Shelby (Jim) Andersen, Jena (Brady) Heard, Travis (significant other, Karitta) Anderson, Krista Anderson-Ruehlow, and Andrea Anderson; special family member, Mark Ruehlow; great-grandchildren, Madison, Brooklyn, Adalyn, Owen, Makenna, and Matthew; sister-in-law, Judy Bisher; brother-in-law, Dale Finger; as well as numerous nieces, nephews, and extended family members. Those preceding him in death are his parents, George Sr. and Alma; son, Jerry Lunn; grandsons, Cole Lunn and Bradley Anderson; sister, Lois (Wilfer) Anderson; and a grandson-in-law, James Ruehlow.

The family of George C. Lunn created this Life Tributes page to make it easy to share your memories.

Send flowers to the Lunn family.