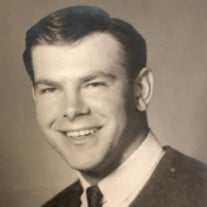 Gary L. West, 75, of Mason City passed away March 4, 2021 at the Good Shepherd Health Center in Mason City. A funeral service will be held 11:00 a.m. Wednesday, March 24, 2021 at Hogan-Bremer-Moore Colonial Chapel, 126 3rd St. NE, Mason City, IA. Visitation will be held one hour prior to the funeral at the chapel. Gary will be laid to rest at Elmwood-St. Joseph Cemetery in Mason City. Gary L. West was born October 3, 1945 in Mason City, the son of Wilbert "Bill" M. and Ruth (Penton) West. Growing up in the area, Gary attended and graduated from Mason City High School. He enlisted into the United States Army, where he proudly served his country until his honorable discharge in 1965. In 1968, Gary married Melinda Matern at Holy Family Catholic Church in Mason City, and the couple was blessed with four sons: Chris, Chad, Cory, and Casey. Though the couple later separated, they remained good friends over the years. Gary worked for Deckers (later, Armour) for numerous years, and later worked for IMT in Garner, filling numerous positions until his retirement in 2011. Gary was a longtime member of the Wesley American Legion. He was a skilled welder and his charm made him a wonderful salesman. Gary had a love of the open road, whether he was driving his 1961 Chevy Apache, his motorcycle or a Winnebago, he enjoyed traveling the country and seeing all there was to see. Whether it was time spent around the campfire sharing his talents on the guitar and singing, or holidays spent in the kitchen showing his skills, his greatest joy in life was his family. His sons and beloved grandchildren meant the world to him. For the past four years, he was able to stay with his sister Cindy. Her care and love for him will be forever remembered. Those left to cherish his memory are his three sons, Chris (Laura) West of Chandler, AZ, Chad West of La Crosse, WI and Casey (Toni) West of Clear Lake; grandchildren, Jackson and Taylor; five sisters, Mary (Bob) Becker of Minnesota, Marlys (Del) Harris of Stigler, OK, Ellen Peterson (Ray Momyer) of Mason City, Robyn (Steve) Horswell of Mildford, and Cindy West of Mason City; as well as numerous extended family and friends. He was preceded in death by his son, Cory; his parents, Bill and Ruth West; a brother, Dennis; and brothers-in-law, Mel Peterson, Sr. and Ray Momyer. Hogan-Bremer-Moore Colonial Chapel. 126 3rd St. NE, Mason City, IA 50401. (641) 423-2372. ColonialChapels.com

The family of Gary L. West created this Life Tributes page to make it easy to share your memories.

Send flowers to the West family.