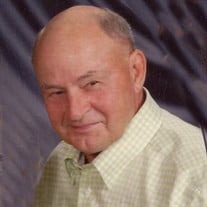 Gary Lee Claude, 83, of Clear Lake, Iowa, was set free to be with his Lord and Savior on October 4th, 2021 after valiantly battling Parkinson’s Disease for many years.   A memorial service to honor Gary will be held at 10:30 a.m. on Friday, October 8, 2021 at Zion Lutheran Church, 112 N. 4th St., Clear Lake with Rev. Steve Bang officiating. Inurnment will follow at Clear Lake Cemetery. Visitation will be held from 5:00 pm until 7:00 pm on Thursday, October 7, 2021 at Ward-Van Slyke Colonial Chapel, 310 1st Ave. N., Clear Lake.   In lieu of customary remembrances, the family requests that memorial contributions be directed to either the Clear Lake Noon Lions or Zion Lutheran Church in Clear Lake, Iowa.   Gary was born on January 13, 1938 in Woolstock, Iowa to Jule (Archie) and Fern (Loux) Claude.  He graduated from Clarion High School in 1955.  Fate stepped in during the fall of 1956 when Gary spotted an attractive young woman roaming the gymnasium of Eagle Grove High School where Gary attended Junior College.  He later married her, the love of his life, Edwina Louise Cleveland, on August 30, 1958.  Through their love, five children were born: Wendy Kaye, Tamera Lee, Tracy John, Scott Douglas, and Shawn Louis. Gary was a proud graduate of Iowa State University in 1961 where he studied Landscape Architecture.  Following graduation, he was employed as a Landscape Architect and Urban Planner for 26 years.  He later transitioned into the world of sales and sold insurance for 17 years.  Gary even embarked into small business ownership when he started a RainSoft Water Treatment franchise where he enjoyed working alongside his children. Gary was an avid outdoorsman and thrill seeker.  His time was best spent outdoors, whether it was downhill snow skiing, water skiing, golfing, or bicycling.  He participated in 10 years of RAGBRAI, several of which were completed with his boys.  RAGBRAI training involved many laps around Clear Lake, timing each split in an attempt to break past personal records. After retirement, Gary enjoyed spending winters with Edwina in South Padre Island, Texas where he became a kite enthusiast.  He went on to gather quite the collection and could be found flying kites on the shore of the Gulf Coast or an open field in North Iowa when conditions were favorable. Gary also enjoyed spending time on Clear Lake whether that was testing his patience with a fishing pole or pulling grandkids around the lake on skis and water tubes.  Throughout the years, Gary could be found cheering on his beloved Iowa State Cyclones where he remained a loyal son forever true; celebrating a big win or staying devoted after a devastating last-second loss.     Gary was a member of the American Institute of Planners, American Society of Landscape Architecture, Zion Lutheran Church of Clear Lake, Iowa and the Clear Lake Noon Lions.   Gary is survived by his wife Edwina of Clear Lake, Iowa, daughter Tamera Gordon of Clear Lake, Iowa, son Tracy (Kem) Claude of Papillion, Nebraska, Scott (Jill) Claude of Tonganoxie, Kansas, Shawn (Billie) Claude of Cedar Falls, Iowa; his grandchildren Ryan (Lucero) Gordon, Breanna (Tanner) Whipple, Josie Claude, and Braden Claude; his great-grandchildren Donovan Gordon, Isabella Gordon and Noah Whipple. Gary was preceded in death by his parents, daughter Wendy, brother Jule (Francis) Claude, and grandson Tanner Claude.   Gary held many roles throughout his time on earth, but his most well known were that of a devoted son, husband, father, grandfather, brother, and uncle.  He will be sorely missed and memories with him will be treasured forever.

Gary Lee Claude, 83, of Clear Lake, Iowa, was set free to be with his Lord and Savior on October 4th, 2021 after valiantly battling Parkinson&#8217;s Disease for many years.   A memorial service to honor Gary will be held at 10:30 a.m. on Friday,... View Obituary & Service Information

The family of Gary Lee Claude created this Life Tributes page to make it easy to share your memories.

Send flowers to the Claude family.