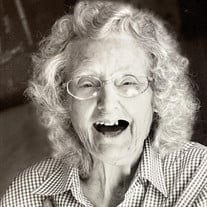 Frieda Arends Snell-Dow, 95, of Gillette, Wyoming, died Sunday, December 19, 2021, at The Legacy Living and Rehabilitation Center’s Pine Place. Frieda was born December 4, 1926 in Shell Rock, Iowa to parents John and Hermiene Arends. Growing up in Cartersville and later moving to Nora Springs, Frieda attended a country school through 6th grade. She then helped out on the family farm. In 1954 she married Sidney Arnold Snell in Mason City, Iowa. After the passing of her husband in 1960 she raised her two children, Janette and James, by herself. Frieda’s passion has always been gardening. Once her children were raised, she continued to spend as much time outside as possible since that was where she was happiest. She worked in Mason City at Fareway in their bakery and then as a cashier. She then married Paul Dow of Nora Springs, Iowa around 1987. When Paul died, she moved to Mason City to be near her son, Jim and his family. During the winter months she enjoyed making gifts for others with her craft of hardanger embroidery. On May 1st, you would usually find her leaving May baskets on the doorstep of her neighbors and family. She loved spending time with her church friends and family. Every fall she would take a road trip to Wyoming to visit her daughter, Janette and family for about a month. She enjoyed a season of working part-time at the Mason City Christian Book Store for her dear friend, Dorothy Heinold. In 2013 she moved to Gillette, Wyoming, to live with her daughter, Janette and family. Frieda always seemed to have a song in her heart and a giggle not far behind. She captured the hearts of those who cared for her at her final residence at The Legacy. She centered most of her life on her faith and loving the Lord until she peacefully went to be with Him. Frieda is survived by her daughter: Janette Snell Kienzle; grandchildren: Heather (Andrew) Swinton, Curtis Snell, Hannah Kienzle, Danielle (Trevor) Gray; great grandchildren: Brinley and Weston Gray; daughter-in-law: Kay Snell; nieces and nephew; and several daughters-in-law and grandchildren/great grandchildren-in-law. Preceded in death by parents: John and Hermeine Arends; husbands: Sidney Snell and Paul Dow; son: Jim Snell; brothers: Henry (Marlene) and Maynard (Dorothy) Arends; sister: Mamie Arends; niece: Theresa Arends. Visitation with viewing will be held 11:30 am until 1:00 pm Monday, January 3, 2022 at Hogan Bremer Moore Colonial Chapel, 126 3rd St NE, Mason City. A prayer service will be held at 1:00 pm. Burial will follow in Oakwood Cemetery, Plymouth.

The family of Frieda Snell Dow created this Life Tributes page to make it easy to share your memories.