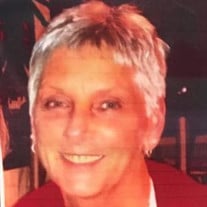 Fredde Carol Jilek left this world Friday, January 21, 2022 at home with her companion of 37 years, Brad Hart, at her side. Fredde was born April 25, 1950 to Fred and Maxine (Stevens) Jilek. She graduated from Mason City High School in 1968. She worked with Dr. Roddy from 1970 until he retired in 1986. “We started dating in 1985 and it worked!” remembers Brad. Fredde bar tended with her friend Jill McLaughlin at Jill’s Place (’83-’91) and at Burkes Bar & Grill until her friend Lee Olson hired her to manage a Burger King. In 2002 she and Lee took on a challenge and opened Decker House Bed & Breakfast, spending many fun-filled hours working, planning parties, cooking, and playing cards daily with Pat Nagel and Linda Miller. After they sold their business in 2011, Fredde spent many hours in their garden pond, cooking and creating crafts. “Her glass sculptures could tower to five feet and her wreaths were beautiful. She loved being with her nieces and nephews. She was one hell of a baker; her cheese cakes from scratch were the best on the planet! Not to forget her special brownies for close friends and family. She started making cookies a month before each holiday and many people looked forward to receiving them.” She also looked forward to winning in Vegas twice annually. Fredde belonged to Garden Club of North Iowa, was an avid bowler at Lee’s Lanes and was on the Board of Juvenile Diabetes for 10 years. Fredde was a fun-loving, creative person and will be dearly missed. Left to cherish her memory are partner, Brad Hart; daughter, Becky Kelsey (MO); brothers, Terry (MC) and Jimmy (Floyd) Jilek; sister, Mary (John) Willier (MC); grandchildren, Kristen and Brennen Kelsey (MO), nieces, Tracy (Scott) Shipman (MC) and Abbe (Chad) Timms (TX); nephews, Michael Willier (MN), Zack Willier (MC) and Tim (Melissa) Jilek (CA); great nieces and nephews, Hayden and Harper Willier (MC), Alexander and Lukas Shipman (MC) and Ruthie and Bodde Timms (TX); special long-time friends, Robert Miller, Caroline Wily and her beloved feline friend, Tinker. She was preceded in death by her parents, Fred and Maxine; brother, Scott; sister-in-law, Linda Jilek, nephew Rob Jilek; and her cats Mini and Eight Ball. A Celebration of Life will be held on Thursday, February 17, 2022, at the Moose Lodge, 22 4th St. NW, Mason City.

Fredde Carol Jilek left this world Friday, January 21, 2022 at home with her companion of 37 years, Brad Hart, at her side. Fredde was born April 25, 1950 to Fred and Maxine (Stevens) Jilek. She graduated from Mason City High School in 1968. She... View Obituary & Service Information

The family of Fredde Carol Jilek created this Life Tributes page to make it easy to share your memories.

Send flowers to the Jilek family.