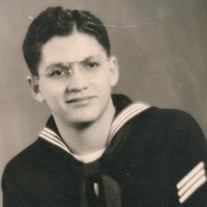 Frank Richard Garcia Sr., 91, passed away in his Mason City, IA home on Sunday, September 26, 2021. A funeral service will be held at 11:00am on Thursday, September 30, 2021, at Hogan-Bremer-Moore Colonial Chapel, 126 3rd St NE, Mason City, IA, with Pastor Mark Doebel officiating. Visitation will be held one hour prior to the service at 10:00am, at the funeral home. Burial will take place at Elmwood St. Joseph Cemetery with Military Honors being done by the Mason City Veterans Honor Guard. Frank was born on October 31, 1929, the son of John and Jesse (Orozco) Garcia of Mason City, IA. He was a graduate from St. Joseph Catholic School. After graduation, in 1948 he enlisted into the Navy, serving in Korea until honorably discharged in 1952. He married Chloe Griffith in Albert Lea, MN. For many years Frank worked as a Business Agent at the Carpenters Union, Local 1313. After retirement he kept busy doing multiple side jobs. He was an avid sports fan especially the Twins, Iowa Hawkeyes, and Timberwolves. Frank himself was inducted into the River City Softball Hall of Fame for his great skills on the field. Frank was known for his quick wit and awesome one liners. In his later years Frank could be found at the table putting puzzles together or finishing a crossword puzzle. Family really kept Frank going, he loved them unconditionally. Frank is survived by three children, Frank (Tammy) Garcia Jr., Tim (Shawn) Garcia, and Anne (Kevin) Moorehead; seven grandchildren; eight great-grandchildren; and a sister, Mary Rick. Frank was preceded in death by his wife, Chloe Jean (Griffith) Garcia.

The family of Frank Richard Garcia Sr. created this Life Tributes page to make it easy to share your memories.

Send flowers to the Garcia family.