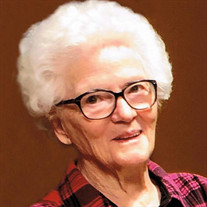 Frances ‘DeDe’ Engleman, 90, of Mason City passed away Monday, September 6, 2021 at Good Shepherd Health Center in Mason City. Visitation for DeDe Engleman will be held on Friday, September 10, 2021 from 4:00 – 6:00 PM at Hogan Bremer Moore Colonial Chapel, 126 3rd Street Northeast, Mason City. Private family burial services will be held at Memorial Park Cemetery in Mason City. Frances Elaine was born March 5, 1931 to Arthur R. and Cecelia J. (McHugh) Smith in Mason City. She attended Mason City Schools, graduating from Mason City High School with the class of 1949. During her high school years and until 1951, she worked as a nurse’s aide at St. Joseph Mercy Hospital. DeDe was united in marriage to Robert ‘Bob’ Engleman on July 12, 1951 in Indianapolis, Indiana. The couple made their home in Atlanta, Georgia where Bob was stationed in the Army. She worked at Sears in Atlanta and upon Bob’s discharge, they returned to Mason City, where she worked at Sears and raised two sons, Bruce and Paul. When the boys were older, she went to work in 1967 at Sieg – Mason City Co. as a bookkeeper, where she retired in 1988. She and Bob wintered in Arizona with their son Paul for 16 years following retirement. DeDe enjoyed cooking, baking, and collecting cookbooks (at one time she had over 2,200!), which she read most cover to cover. She will be remembered for her potato salad, Christmas cookies (which she shared with many family members, neighbors and friends), cinnamon rolls, and various jello salads, always topped with Cool Whip. She enjoyed her weekly visits to the beauty shop, doing word search and crossword puzzles, playing mahjong on the computer, and watching her soap opera ‘The Bold and the Beautiful.’ In earlier years, she liked to do ceramics, and made many decorative items that have been passed down to her family. Her greatest enjoyment was spending time with her family. DeDe is survived by two sons, Bruce (Glennys) Engleman of Cascade, Iowa and Paul Engleman of Phoenix, Arizona; two granddaughters, Brianne (Michael) Ewing of Clarion, Iowa and Bobbi (Brent) Burg of Town of Middleton, Wisconsin; great-grandsons Ethan and Miles Burg; brother Mike (Marge) Smith of Phoenix, Arizona, several nieces and nephews, extended family members and friends. She is preceded in death by her parents, husband Bob in 2018, brothers Bud Smith and Robert Smith, and sisters-in-law Betty Smith and Virginia Smith. DeDe’s family would like to extend their sincere gratitude to Good Shepherd Health Center for the wonderful care given to her over the past three years. Also a big thank you to MercyOne North Iowa Hospice for the supportive service they provided over the past six months. www.ewingfh.com Ewing Funeral Chapel 178 Center Street West Britt, Iowa 50423 641-843-3839

The family of Frances "Dede" Engleman created this Life Tributes page to make it easy to share your memories.

Send flowers to the Engleman family.