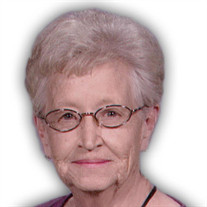 Evelyn Pauline Hogan, 89, of Dougherty, died on Tuesday, March 23, 2021 at Country Meadow Place in Mason City. She passed peacefully, surrounded by family, friends, and caring staff into the arms of her Heavenly Father. Evelyn’s family will greet relatives and friends from 1:00 pm until 3:00 pm Sunday at S.T.P.A.T.S., 410 Patrick St., Dougherty, please dress in casual attire. A graveside service will be held 3:00 pm Sunday, March 28, 2021 at St. Patrick Catholic Cemetery, Dougherty. Following the committal service, all are invited to S.T.P.A.T.S. for a meal. Should friends desire, memorials may be left in Evelyn’s name to the American Legion Auxiliary or the Hogan Brislin American Legion Post 354. The daughter of Guy and Ida (O’Rourke) Biggs, Evelyn was born on October 11, 1931 in Rockford, she was eight of ten siblings. She attended Rockford High School where she played on the girls’ 6 on 6 basketball team. Following high school Evelyn worked various jobs including at a café in Charles City with her friend, Betty Larson. She met Donald Hogan at a dance in Dougherty, and on her 21st birthday Evelyn was united in marriage to Don. Together they would be blessed with 60 years of marriage and four children, Ron, Debbie, Randy, and Dave. Evelyn shared her talents in many ways during her life. She wallpapered with her special group of friends, gardened, canned, walked beans, was a stained glass crafter, 4-H leader, senior citizens cook, and painted and stained woodwork for homes built by her son in law. She enjoyed traveling, visiting her sister in Arkansas, a trip to Germany to visit her newborn granddaughter and still giggled over memories of her two trips to Vegas with her family and friends. She enjoyed fishing trips and kept a trophy fish in the freezer for years – proof that she caught the biggest fish! She was active in politics, never missing a caucus or a vote. She helped with elections and held a term as a Dougherty Council Member. She was always up for a lively political discussion and was lovingly reminded at family gatherings the rule of “no politics and no religion”. She advocated for the poor and underprivileged, women’s rights and the importance of education. Don and Evelyn opened a bar and restaurant in 1983 – Dougherty Tap. Every Friday night was a packed house for her chicken and fish and homemade salads. After the lunch crowd left, she played cards for hours with her friends; making enough money to purchase her first brand new car! Evelyn learned a lot about golfing while working at the Linn Grove Country Club…she often questioned why they all kept coming back to try, try again. She was involved in the American Legion Club where she and Delores Marzen hold the record for Poppy Sales. Evelyn was a member of St. Patrick’s Catholic Church and was the director of the CCD program. She was known for her organizational skills in coordinating, funeral dinners, the annual turkey dinner where her turkey dressing was the star of the meal! She spent countless hours at the church – if only her cake pans could talk! We loved her as our Mother, but she blossomed as a grandmother. She has guided, encouraged, and loved unconditionally. Those grateful in sharing in her life are her children, Ron (Pat) Hogan, Debbie (Jim) Bills, Randy (Angela) Hogan, and Dave (Gerlinde) Hogan; grandchildren, Jay (Joey) Elmore, Allison (Mark) Bower, Jill Bills, Andy (Katie) Bills, Stephanie Hogan, and Christina Antal; great grandchildren, Emily and Jesseca Bower, Morgan and Madison Elmore, Lauren and Ellie Bills, Madison and Skylar Antal; siblings, James Biggs and Glenn Biggs; sister in law, Gladys Pfertzel; special cousin, Ed Soucek; as well as nieces, nephews, extended relatives and many friends. Evelyn is preceded in death by her husband, Don Hogan; parents, Guy and Ida Biggs, and siblings, Earl Biggs, Henry Biggs, Robert Biggs, Irene Biggs, Elma Dow, Gladys Waters, and Sylvia Pahl.

The family of Evelyn P. Hogan created this Life Tributes page to make it easy to share your memories.

Send flowers to the Hogan family.