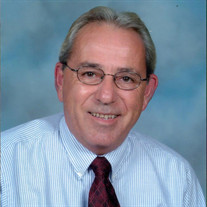 Eugene “Geno” P. DiMarco, 74, of Mason City, passed away Thursday, April 8, 2021 in Mason City. A Funeral Mass will be held 10:30 a.m. Wednesday, April 14, 2021 at Epiphany Parish Holy Family Catholic Church,722 North Adams Avenue, Mason City, with Reverend Neil Manternach officiating. Burial will take place after the service at Elmwood St. Joseph Cemetery. Military honors will be conducted by the Mason City Veterans Honor Guard. Visitation will be held 5:00 to 7:00 p.m. Tuesday, April 13, 2021 at Hogan-Bremer-Moore Colonial Chapel, 126 3rd Street NE, Mason City. Memorial contributions may be directed to the family and a charity will be established at a later time. Eugene DiMarco was born February 8, 1947 in Mason City, son of Levino and Lena (Vita) DiMarco. He was raised in Mason City and graduated from Newman High School, class of 1965. He enlisted into the Marine Corp, served in Vietnam from 1968 to 1970, and was honorably discharged in 1972. After his discharge, he graduated from Minnesota State University, Mankato, with a degree in speech pathology. He later established ES-MARC Investments in Mason City in 1988 and continued until his passing. Geno was united in marriage on June 14, 1975, to Susie Egeland and to this union two sons were born. The family made their home in Mason City. He was a member of the Epiphany Parish Holy Family Catholic Church, Mason City; Mason City VFW; Chamber of Commerce of Mason City; and was a team member of the Budweiser Poodle Fastpitch Softball Team during the 70’s and 80’s, as well as a long time participant in the Mason City Bowling Association. Geno was a loving father, enjoyed cooking, spending time with his grandchildren and going to the VFW to socialize with his friends. He was an avid high school and University of Iowa wrestling fan, as well as a frequent supporter of local mom and pop pubs and eateries. Geno never missed a family event and wherever he traveled he found a friend. Geno is survived by his two sons, Benjamin (Katie) DiMarco of Mason City and Thomas DiMarco of Denver, Colorado; former wife, Susie DiMarco of Mason City; two grandchildren, Kale DiMarco and Brianna DiMarco of Mason City; five siblings, Joseph (Andrea) DiMarco of Bozeman, Montana, Mary Jo (Thomas) Welp of Rochester, Minnesota, Nancy (Roger) Dunn of Waverly, Iowa, John (Elizabeth) DiMarco of Mason City; Paul (Lynda) DiMarco of Waverly, Iowa and several nieces, nephews and extended family and friends. He is preceded in death by his parents, Levino and Lena DiMarco.

The family of Eugene Paul DiMarco created this Life Tributes page to make it easy to share your memories.

Send flowers to the DiMarco family.