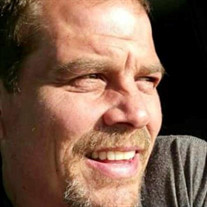 Eric Lee Bales, 54 of Mason City, died Thursday, December 24, 2020, at MercyOne North Iowa Medical Center in Mason City. A private family memorial service will be held Saturday, January 30, 2021, at Hogan-Bremer-Moore Colonial Chapel, 126 3rd St. NE, Mason City with Jared Nassiff officiating. A public visitation will be held from 10:00-11:00 a.m. Saturday at Hogan-Bremer-Moore Colonial Chapel. All contributions to the Eric Bales Memorial may be sent to Ken Bales, 16 N. Willowgreen Court, Mason City, IA, 50401. Eric was born at Fairfax County Hospital in Fairfax, VA on May 15, 1966. He was the third son of Joan and Kenneth Bales. After moving from Virginia, Eric attended Clear Lake Schools, where he later graduated. He was an outstanding long-distance runner for Clear Lake, which included cross country and the 1600m, 3200m races in track. Eric had a natural gift for long-distance running and achieved many awards. Following high school graduation, Eric attended North Iowa Area Community College for one year before entering the workforce. Upon that decision, Eric pursued a career as a semi-truck driver. He worked for many companies, including most recently for Ruan Trucking Company and Caledonia Haulers out of Caledonia, MN. When Eric was not working, he loved spending time with his children, grandchildren, friends, and relatives. He also shared a passion for firearms as he was a part of the National Rifle Association and had a great interest in riding his motorcycle with his closest friends. Eric had a knack for mechanical repair and could always be counted on to fix just about anything. Those left to cherish Eric’s memory are his father, Kenneth Bales and Ken’s companion Kaye Steger of Mason City; children, Alex and Ryanna Bales of Des Moines, IA; grandchildren, Riverly and Emerson Bales; brother, Ryan (Patti) Bales of Vacaville, CA; sister-in-law, Diane Bales Flugard of Buckner, MO; uncles, Robert (Karen) Bales of Clear Lake, IA and Robert (Lea) Speakar of Clear Lake; and many nieces, nephews, and cousins throughout several states. He was preceded in death by his mother Joan Bales, and older brother, Brad Bales.

The family of Eric Lee Bales created this Life Tributes page to make it easy to share your memories.

Send flowers to the Bales family.