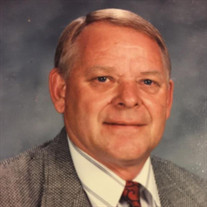 Dwight Eugene Williamson, 85, of Clear Lake, died Saturday, September 11, 2021, at MercyOne North Iowa Medical Center in Mason City. Per Dwight’s wishes, his body has been cremated and a Celebration of Life will be held at 3:00 p.m. Saturday, October 23, 2021, at the Ventura Community Center; 4 Weimer St., Ventura. Dwight’s family suggests memorial contributions to Central Gardens of North Iowa in Clear Lake, the University of Iowa Stead Family Children’s Hospital in Iowa City or Redeemer Lutheran Church in Ventura. __________________________________________________________________________ Dwight Eugene Williamson, “Dad”, was born on January 26, 1936, on a farm near Missouri Valley in Harrison County, Iowa, during one of the worst winters the state had ever seen. There was a succession of blizzards that January, one of which lasted three days. It was so cold that winter; people burned their furniture to keep from freezing. This was a fitting start for Dad, who was the toughest guy we’ve ever known. He earned a degree in Science and Mathematics from Wayne State in Nebraska and a Master’s Degree from the University of Idaho. He taught for 38 years before retiring in 1998 from Clear Lake Community Schools. Education was Dad’s passion. He taught Physics, Earth Science, Mathematics and life lessons beyond the classroom. He was a mentor, counselor, and advocate for any student with a desire to learn or in need of direction or support. He was highly respected among his colleagues, many of which became life-long friends. He made learning fun and engaging. If you had Dad as a teacher, you can likely recite Mohs Scale of Hardness and the spectrum of colors in a rainbow. Over the years many former students have thanked him for his positive influence on their career paths and life choices. Those expressions of gratitude meant the world to him. Dad was an imposing figure with a distinctive gait caused by a hunting accident in his youth. His deep voice alone could strike fear in an incoming freshman. He was firm but fair. He had a fierce reputation at school, but was actually a caring, sentimental giant – easily brought to tears by a heartfelt gesture. Devoted to his large family, Dad was protective, supportive, and extremely proud. We were his priority. For him, any activity was an educational opportunity – including family trips. He was constantly pointing out the world around us: outcrops, terracing, stalagmites, a sun dog, cumulonimbus or cirrus clouds. We watched meteor showers, comets, solar and lunar eclipses. We thought every kid knew the difference between petrified wood and a geode, and that halite tastes like salt. A patriot, a God-fearing servant to the Lord, a staunch conservative with an exhausting work ethic, Dad was early to rise and late to bed. He was always busy with something. He was an elder and board member at the Clear Lake Christian Church. Later in life he joined the Redeemer Lutheran Church in Ventura, where Pastor Burns was a valued counselor and friend. Dad loved Clear Lake and seemed to know everyone in town. (Mowing the lawn on Main Street was a day-long chore as he continually stopped to visit with passersby.) Always informed and active in the community, he served on the Planning and Zoning Commission for several years and was instrumental in the creation of Central Gardens. Dad and Monty owned the Body Shop Fitness Center in Clear Lake for several years. He spent hours lifting weights and enjoying the company of friends. Friends were an important part of his life. He loved fishing trips to Canada and relished dinners with his fishing buddies when he could no longer make the trip. In the late 90’s, our family’s restaurant, The Sandbar, became a favorite location for him and his friends to gather. Dad’s surviving family includes his five children and our spouses. He is also survived by his grandchildren: Ryan Williamson, Nick Williamson, Thomas Treloar, Liz Richardson, Chloe Williamson, Austin Richardson, Crystal Richardson, and Trisha Schoo; his great-grandchildren: Jax, Hazel, Milo, and Braden; his siblings: Judy Kirlin and Jim Williamson and Dad’s cherished companion of 18 years, Bobbi Bruns. We extend a special thanks to the staff at Oakwood Care Center and Mercy One who provided physical care for Dad when we could not and to Pastor Burns for Dad’s spiritual care and friendship. Dad requested an uplifting celebration of his life in lieu of a formal church service. His family, friends, former students, and colleagues, all who meant so much to him, are invited to join us on October 23, 2021 at the Ventura Community Center starting at 3:00 pm to honor and celebrate the life of our father, Dwight. Monty and Laura Williamson Shelly and Roger Richardson Cam and Tony Treloar Lori and Mike Wagner Amy Williamson and Erik Fisk

Dwight Eugene Williamson, 85, of Clear Lake, died Saturday, September 11, 2021, at MercyOne North Iowa Medical Center in Mason City. Per Dwight&#8217;s wishes, his body has been cremated and a Celebration of Life will be held at 3:00 p.m. Saturday,... View Obituary & Service Information

The family of Dwight Eugene Williamson created this Life Tributes page to make it easy to share your memories.

Send flowers to the Williamson family.