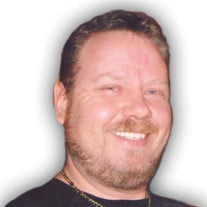 Douglas “Doug” W. Krueger, Sr., 47, of Mason City, entered into eternal rest on October 17, 2020, at MercyOne Des Moines Medical Center. A funeral service will be held at 11:00 a.m. Friday, October 23, 2020, at Hogan-Bremer-Moore Colonial Chapel, 126 3rd St. NE, Mason City, with Mark Doebel officiating. Burial will be at Memorial Park Cemetery in Mason City. Doug was born on November 9, 1972, the son of Arnold and Ruth (Greene) Krueger in Indianapolis, IN. The family moved to Rockford before settling in Mason City. Doug was the youngest of eight children. He worked at S&K Enterprises in Clear Lake for the last ten years. In 1989, he met the love of his life, Taunya, and in 1990, they welcomed a son. In 1992, they welcomed a daughter and proceeded to get married on July 1, 1992. Then, in 1996, they welcomed another baby girl to complete the family. Doug really enjoyed riding his Harley, whooping everyone in pool, hogging the ball while playing volleyball, road trips with his wife, but most of all he cherished the time spent with his family, children and grandchildren. Continuing his legacy includes his wife, Taunya of 28 years; son, Douglas Jr. And his children, Douglas III, Kaylynn and Maxx; daughter, Amanda (Jason) and their children, Weston and Alayna; and his youngest child, Nicole (Will) and their children, Brooklyn and Parker. He was also survived by three brothers, Chuck, Bob, and Dan; two sisters, Barb and Lori; numerous nieces, nephews and cousins; and a brother from another mother, Jerry Christenson. He was preceded in death by his parents; sister, Donna; brother, Jerry Sr.; and many aunts and uncles.

The family of Douglas "Doug" W. Krueger Sr. created this Life Tributes page to make it easy to share your memories.

Send flowers to the Krueger family.