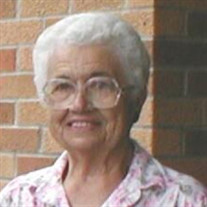 Dorothy Janet (Rademaker) Hanna, 90, of Manly went to be with her Lord on March 8, 2022 at the Manly Specialty Care Center in Manly. There will be a private graveside burial service with a public memorial service and celebration of Dorothy's life at the Bethel United Methodist Church in Manly at a date to be announced. Dorothy Janet (Rademaker) Hanna, 90, of Manly went to be with her Lord on March 8, 2022 at the Manly Specialty Care Center in Manly. Dorothy was a lifelong resident of Worth County, born November 7, 1931 in Grafton, Iowa as the daughter of John and Dorothy (Braun) Rademaker. She grew up on the family farm, along with her younger sister, Mary. She attended Grafton schools, and as a high school student was active in sports, both softball and basketball. Dorothy enjoyed helping her parents on the farm, both with household chores and and especially taking care of the animals. She graduated from Grafton high school in May,1947. On December 5,1948 she married Jack Hanna at the Grafton Lutheran Church. Following the wedding, the couple moved to the family farm west of Manly, where they raised four children, Mark, Marsha, Janet, and Lyle. Along with taking care of her family, Dorothy actively helped with many of the farm chores. Jack and Dorothy left the farm in 1974 and moved to Manly. Both of them continued to drive school bus for North Central Manly schools. By the time she retired, Dorothy had driven a school bus for 34 years and would, for the rest of her life, continue to enjoy receiving wedding invitations, birth announcements and general well wishes from her many "bus kids". During their years together in Manly, along with driving bus, Jack and Dorothy operated a home improvement business, specializing in door and window repairs. In their recreational time, they enjoyed spending time together in various area parks. They made it their practice to have at least one cookout in a park each month. Iowa weather notwithstanding, they maintained this tradition for more than 20 years, almost up to Jack's death in 1990. Dorothy enjoyed gardening throughout her entire life, and she was famous for her ability at baking cakes, pies and other cookies. Both Dorothy and Jack were very active in the Bethel United Methodist Church in Manly, which had been the Bethel Evangelical United Brethren church at the time they were married. Dorothy taught elementary Sunday school, and was a long time active member of the Willing Workers circle. Dorothy and Jack were members of the Christian Homebuilders adult Sunday school class that started as a group of young married couples in the 1950s and forged a bond that would keep the class and its circle of friends together for a lifetime. Both Dorothy and Jack liked spending time with family, especially getting a chance to be around their three grandchildren, Sonya, Jess, and Trey. Nothing was more enjoyable to them than to have any or all of the grandchildren stay for a few days with them in Manly. At the time of Jack’s death in 1990, he had been a Worth County supervisor board member for almost three terms. In the next regular election Dorothy ran for his seat and was elected to the board and then re-elected for two additional terms, including a period as chairperson of the board. Dorothy spent her lifetime in service to her family, her church, and her community. Taking care of others was her cherished mission in life. Dorothy was preceded in death by her parents; her sister, Mary; her husband Jack; her daughter, Marsha, her sister-in-law Norma Happel and her brother-in-law Alfred Happel. She is survived by three children: Mark (Barb) Hanna of Ogden Iowa; Janet Hanna of Manly; and Lyle (Terri) Hanna of Katy, Texas; three grandchildren Sonya (Brett) Nichols of Boone Iowa; Jess (Erin) Hanna of Silvis, Illinois; and Trey Hanna of Katy, Texas; four great grandchildren, Alec Nichols, Aleyna Nichols, of Ames, IA; AJ and Andrew Hanna of Silvis, Illinois; as well as numerous nieces and nephews.

Dorothy Janet (Rademaker) Hanna, 90, of Manly went to be with her Lord on March 8, 2022 at the Manly Specialty Care Center in Manly. There will be a private graveside burial service with a public memorial service and celebration of Dorothy's... View Obituary & Service Information

The family of Dorothy J. Hanna created this Life Tributes page to make it easy to share your memories.

Dorothy Janet (Rademaker) Hanna, 90, of Manly went to be with...

Send flowers to the Hanna family.