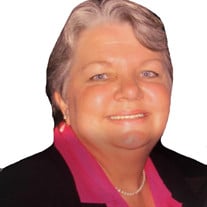 Donna Spurbeck, 63, of Mason City, passed away Friday, October 29, 2021 at MercyOne Hospice of North Iowa, Mason City. Funeral will be held 10:30 a.m. Saturday, November 6, 2021 at Trinity Luther Church, 213 North Pennsylvania Avenue, Mason City, IA 50401, with Rev. Kathy Graves officiating. Burial will be in the Memorial Park Cemetery, Mason City Visitation will be held 5:00 p.m. to 7:00 p.m. Friday, November 5, 2021 at Hogan-Bremer-Moore Colonial Chapel, 126 3rd Street NE., Mason City. Memorial may be directed to the family and a charity will be established at a later date. Donna Paulette Spurbeck was born July 13, 1958 in ChulaVista, CA, the daughter of Donald Patrick and Orvalla Gladys (Sampson) Mugan. Their family moved to Mason City shortly after Donna’s birth. She attended Mason City High School before meeting the love of her life, Robert Lee Spurbeck, Sr. and on October 23, 1977 the couple was married in Albert Lea, MN. Together they were blessed with three children, Nicole, Melinda, and Robert Jr. The family made their home in Irving, TX, and Cedar Falls, IA, before returning to Mason City in 1990. Donna’s family was her whole world. One of her greatest joys in life was becoming a mother and later a grandmother. She was a phenomenal cook, and anything that came out of her kitchen was bound to be delicious. Donna was fun loving and goofy, and never turned down an opportunity to share her humor. She and Robert Sr. were longtime members of Trinity Lutheran Church. Her faith brought her comfort and she found great peace in the Lord’s prayer. Just as the 23 Psalm tells us. Donna has found peace in the green pastures, she has no fear, because we know she is with God. Those left to cherish her memory are her beloved husband, Robert Sr.; her children, Nicole (Jason) Esquivel of Waterloo, IA, Melinda (Mark) Kibuta of Lynnwood, WA, and Robert Jr. of Mason City; grandchildren, Lucas and Landon Klang, Kyren Esquivel, Xavier, Leah and Aaron Kibuta, Kadence and Kiersten Spurbeck; five brothers, Mark (Mary) Mugan, Ralph Mugan, Allan Mugan, Michael (Rhonda) Mugan, and Paul (Beth) Mugan; sister in-law, Cheryl (Tike) Herman; as well as numerous nieces, nephews, and extended family members. Preceding her in death are her parents, Donald and Orvalla; a nephew, Adam Mugan; a brother-in-law, Lynn Spurbeck Jr.; father and mother in-law, Lynn Wilson Spurbeck Sr. and Betty Evon (Whitmarsh) Spurbeck.

The family of Donna P Spurbeck created this Life Tributes page to make it easy to share your memories.

Send flowers to the Spurbeck family.