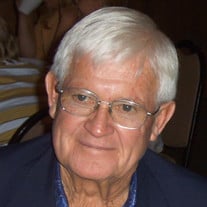 NORTHWOOD-Donald K. Johnson, 93 of Northwood, passed away Saturday, June 12, 2021 at the IOOF Home in Mason City. A Celebration of Life in his honor will held 6:00 p.m. Friday, August 20, 2021 at the Northwood VFW, 800 8th St N, Northwood, IA 50459. A livestream will be available on our facebook page: www.facebook.com/hoganbremermoore. Donald will be laid to rest the South Shell Rock Cemetery. The family will greet friends from 4:30p.m. to 6:00p.m at the VFW. Donald “Don” Kenneth Johnson was born November 9, 1927 in rural Thompson, IA, the son of Engvald “Enge” and Amanda (Johnson) Johnson. He graduated from Ventura High School after returning home from World War II where he served on the Naval submarine USS Scabbardfish as a ship’s barber. Following his honorable discharge, Donald married the love of his life, Doris Medlin, on July 31, 1949 in Clear Lake. The couple was blessed with five children, Deborah, Diane, Denise, Deanna and Douglas. Their first home was in Clear Lake where Donald managed the pro shop and was the greens keeper at the All Vets Social Center. They later moved to Manly, IA where they owned the Rail Club. In 1960 the family moved to their farm Northwest of Northwood and he worked for the Rock Island Railroad as a switchman. Starting in 1987 he represented law firms advocating for railroad workers, retiring in 1997. Donald was a member of the American Legion and Our Buddies VFW Post 6779 where he served as a past president. He was a member of the Worth County Historical Society and First Lutheran Church of Northwood. He was active in the Pork Producers during the 1970s, spent many hours enjoying golf, antique auctions, Saturday night dances and travelling the United States and abroad. He loved planning family vacations to the National Parks. After retirement, Sue’s Corner Post was a favorite place to start his day, having coffee with friends and neighbors. He was a self-taught carpenter, remodeling the family’s farmhouse from no electricity or indoor plumbing into a beautiful home furnished with antiques that he would restore and refinish purchased from auctions he and Doris attended. Donald will be remembered for his smile, his easy laughter, his love for chocolate and the joy he brought others, especially his grandchildren. His children are thankful for the work ethic he instilled in their lives. As awful as it seemed at the time, they all cherish being taught to work hard and have a good attitude. “With that you can go anywhere and do anything.” Donald’s family would like to thank anyone who looked out for him over the years as Alzheimer’s took control of his memory. It didn’t change his joyful smile, or his loving heart, for which we give thanks. “yet I will rejoice in the Lord; I will take joy in the God of my salvation.” Habakkuk 3:18 Those left to cherish his memory are his five children, Deborah (Wayne) Black, Cave Creek, AZ; Diane (Charles) Dahlby, Gladys, VA; Denise Ehlenfeldt, Kensett, IA; Deanna (Scott) Madsen, of Northwood; Douglas (Sil) Johnson Toronto, Canada; 17 grandchildren, 16 great-grandchildren and 1 great-great-grandson; a brother Dennis “Tiny” (Judy) Johnson, Carpenter; as well as extended family members. Preceding him in death are his beloved wife of 69 ½ years, Doris; his parents, Enge and Amanda; a son-in-law, Ralph Ehlenfeldt and a granddaughter Amanda Lobdell.

The family of Donald K. Johnson created this Life Tributes page to make it easy to share your memories.

Send flowers to the Johnson family.