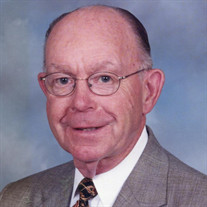 Donald Lloyd Goranson, who was born at home in Clear Lake, Iowa 94 years ago, died at home on Sunday. Due to Covid 19 considerations, the family is holding a private service on Saturday, May 8, 2021, at Ward-Van Slyke Colonial Chapel, 310 1st Ave. N., Clear Lake, with Rev. David Peterson officiating. Inurnment will be at Clear Lake Cemetery. The service will be streamed at 1:00 p.m. Saturday on the Ward-Van Slyke Colonial Chapel Facebook page and available on Donald’s tribute page at www.colonialchapels.com. Known as Bud or Buddy, Mr. Goranson was a lifelong Clear Laker. After graduating from CLHS in 1944, he enlisted in the Army Air Corps. Following the service, Bud attended the University of Iowa, received his B.A. in Economics and graduated from law school in 1949. He was a member of the Sigma Alpha Epsilon social fraternity and the Phi Delta Phi legal fraternity. Returning to Clear Lake, he began his law practice and became a partner of E.B. Stillman in 1950 and practiced law until his retirement in 2010. In 1951 Mr. Goranson was married to Virginia Burt of Ottumwa, and they had three sons. Virginia died at age 41. In 1970, Bud and Anne Lovell – who also had three sons – got married and combined their families. Last year they celebrated their 50th wedding anniversary. Bud loved Clear Lake, participating in many local organizations. He was a member and past president of the American Red Cross, Jaycees, Chamber of Commerce, Lions Club, Toastmasters and the Cerro Gordo County Bar Association. Bud was a member of the United Methodist Church, American Legion and Iowa State Bar Association. Mr. Goranson served as City Attorney of Clear Lake for 30 years. Bud and Anne’s home has always been the center of the universe for their children and grandchildren, who gather there for numerous holidays and never miss the 4th of July. Bud Goranson was a loving husband and father, a proud veteran, a trusted attorney, an avid reader, a snappy dresser and a friend to all. The family is especially grateful to the caregivers whose love and dedication have enabled Bud and Anne to stay together in their home. Mr. Goranson was preceded in death by his parents, Henry and Alta, first wife Virginia, son Joseph and brother Gale. He is survived by his loving wife Anne, sons and daughters-in-law John and Janet Lovell, Steve Goranson and Marcia Jensen, Tom and Jan Lovell, Dan Goranson and Kimberly Darling, Jim and Janis Lovell, grandchildren and their partners Travis and Corie Klein, Maura Klein and Brandon Sturgill, Emily Klein and Wes Peetz, Sara Goranson and Nick Schulz, Jenessa Jensen and Drew Coursin, Emily Goranson and Niki Heber, Paul and Kim Goranson, Tim and Melissa Goranson, Katie and Ross Stedman, Beckie and Jacy Dillahunty, Chris and Morgan Lovell, as well as 10 great-grandchildren -- 14 by the 4th of July! In lieu of flowers, the family requests donations to the Clear Lake Public Library.

Donald Lloyd Goranson, who was born at home in Clear Lake, Iowa 94 years ago, died at home on Sunday. Due to Covid 19 considerations, the family is holding a private service on Saturday, May 8, 2021, at Ward-Van Slyke Colonial Chapel, 310 1st... View Obituary & Service Information

The family of Donald Goranson created this Life Tributes page to make it easy to share your memories.

Donald Lloyd Goranson, who was born at home in Clear Lake, Iowa...

Send flowers to the Goranson family.