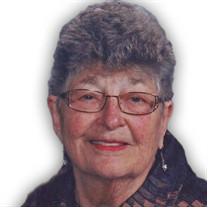 Dola Margaret Shannon, 88, of Mason City, passed away Good Friday, April 2, 2021 at the Lutheran Retirement Home, Northwood, Iowa. A Memorial Service will be held 11:00 a.m. Thursday, April 8, 2021 at Hogan Bremer Moore Colonial Chapel, 126 3rd Street NE, Mason City, with Reverend Kathy Graves officiating. Burial will be held in the Rock Falls Cemetery. Family requests that masks to be worn during the services. Visitation will be held one hour prior to the service on Thursday, April 8, 2021 at Hogan-Bremer-Moore Colonial Chapel. Memorial contributions may be directed to Dola Shannon Memorial Fund. Dola was born June 29, 1932 on the farm North of Rock Falls, Iowa, the daughter of Carsten and Addie (Mitchell) Bahnsen. Dola attended school in Rock Falls, class of 1950. She was involved in Band and sports during her high school years. After graduation, she worked at the telephone company in Rock Falls, then went on to work at St. Joseph Mercy Hospital as a Nurse's Aide. In 1952, Dola married Louis J. Infante and to this union five children were born. Dola would later divorce and marry John "Jack" Shannon on August 26, 1978. Dola worked at Grupps on the North end in the bakery department. Then went on to work at Libbey-Owens-Ford-Glass Company, when they opened in Mason City and continued working for them as a glass inspector until their closure. Following their closure, Dola went to work at the bakery at Easter's in Mason City. But while working all these jobs, she was always busy baking, canning - when items were in season. She would sell her “Tortilla’s”, “Hot Sauce”, cookies, bread, and other baked goods. She will be remembered for never letting anyone walk away from her table hungry, she always had the coffee pot on, and friends and family were always welcome to stop in at any time and for being a hard worker. Dola in her “spare time”, would go gambling with Jack and her friends. Dola later moved from her home, with two kitchens, on Cerro Gordo Way to Corner Stone Assisted Living, where she resided for four years. After those four years, she moved to the Lutheran Retirement Home for two years. Her daughter, Lindee, works there; so, it really helped when the pandemic started that she had a family member to see daily. Even while in both places, mom's passions for baking, cooking, or wanting to can were still a desire for her. Dola was a member of Trinity Lutheran Church, VFW and Ladies Auxiliary of Mason City. Dola is survived by her children, Debra Perry, Kristi Infante, John Infante, Lindee Infante and Joy Campbell; step children, Maureen "Reenie" Skellenger, Tammy Carpenter, Michele Shannon, many grandchildren, great grandchildren; brother, Westly "Bud" Bahnsen and wife Pauline, and many extended nieces, nephews, and many Shannon in-laws. Dola was preceded in death by her parents, Carsten (Addie) Bahnsen; husband, John "Jack" Shannon; Shannon in-laws and son in-law, George Perry Sr.

The family of Dola M. Shannon created this Life Tributes page to make it easy to share your memories.

Send flowers to the Shannon family.