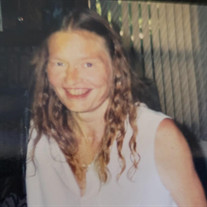 Diane Louise Rick, 58, of Mason City, died Thursday, October 7, 2021, at University of Iowa Hospitals and Clinics in Iowa City. A funeral service will be held at 2:00 p.m. Friday, October 15, 2021, at St. James Lutheran, 1148 4th St. SE, Mason City. Inurnment will be at Memorial Park Cemetery at a later date. Visitation will be held one hour prior to the service at the church. Memorial contributions may be directed to Diane’s family. Diane was born March 17, 1963, the daughter of Raymond Sr. and Sharon (Berg) Smidt in Mason City. She married Tomy Lee Rick on July 20, 1985, also in Mason City. He preceded her in death on April 16, 2014. A graduate of Mason City High School, Diane worked in a National Guard office before working in various retail positions for most of her life. She was a hard worker who took pride in that work. She was a member of St. James Lutheran Church in Mason City. Diane had a big heart and loved to brighten people’s days. When she was younger she enjoyed horseback riding, barrel racing and spending time with her siblings. After starting her own family, she enjoyed gardening, trips to Beeds Lake and other parks to grill and enjoy nature with her family, as well as any other adventures that crossed her path. More than anything, Diane was a loving wife, mother and grandmother to her family. One of the greatest lessons she taught her children is to stand strong against any obstacle, no matter how insurmountable it seems. Her children will continue to honor and embody her loving and fierce nature, as well as her adventurous spirit. She will be greatly missed by all who knew her. Diane is survived by her children, Alicia Rick of Omaha, Sheila Rick of Mason City and Jacob Rick of Mason City; three grandchildren, Isaiah Lee Rick, Jasmine Mae Rick and Tomy Jayden Everett Rick; brother, David Rick; niece, Sherry Gonzalez; and nephew, John McLaughlin, Jr. She was preceded in death by her beloved husband, Tomy; parents, Raymond Sr. And Sharon Smidt; parents-in-law, Everett and Ruth Rick; and sister, Doreen McLaughlin.

The family of Diane Louise Rick created this Life Tributes page to make it easy to share your memories.

Send flowers to the Rick family.