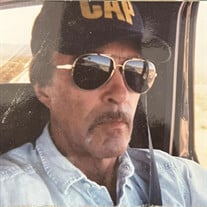 DeWayne Allen Lee, 82, of Mason City, Iowa was called to heaven on February 4th, 2022. A Celebration of Life will be held from 4:00 p.m. to 6:00 p.m. on Wednesday, February 9, 2022 at Hogan-Bremer-Moore Colonial Chapel, 126 3rd St. NE, Mason City, IA. A time of memories and scripture will be held at 6:00 p.m. at the Chapel. Following the service, the family will continue celebrating his life at the All Vets Center (VFW), 1603 S Monroe Ave, Mason City, IA 50401, one of DeWayne's favorite spots. DeWayne was born on July 26, 1939, the son of Allen and Ella (Habben) Lee in Green Meadow Township Minnesota. DeWayne grew up on a family farm, near Ada, MN and graduated from Ada High School. In the mid-50s, the farm was sold and he continued to cultivate fields and bring harvest to the neighboring farms into his adult years. DeWayne then served as a specialist in Headquarters 1/136th Regiment, 47th ID., MNARNG, in St. Cloud, Minnesota. Performing active duty training at Fort Ord California, he served at the age of 17, from 1956 to 1962. His service was marked with much success. He applied for and was awarded a contractor position with the State of Minnesota as a phlebotomist, working the lab of the infirmary in 1973, at the Juvenile Detention Center at Lino Lakes, MN. He attended additional vocational OJT with the Minneapolis Clinic of Psychology and Neurology (Golden Valley) and attained a full time position as a traveling technician, serving the greater Twin Cities Metro Hospitals. In 1986, technology improvements caused the obsolescence of his equipment and sudden loss of position. He continued to provide by working in new-home construction and his first owner operator business D and D Painting. He transitioned into hardwood flooring and worked at Anderson-Ladd until 1993, when he became independent and began to work on his own. In 1995, he and his sons worked in the construction industry in Long Beach, CA. Then in 1996, he started his business, Northern Iowa Hardwood Flooring. DeWayne bought his home in Mason City and remodeled it by hand. He enjoyed time with family and friends, often in his garage and was known to strike up a tune. DeWayne was often found in the crowd supporting Hunter’s racing career. He is survived by his sons, Hunter (Mallory) Lee of Clear Lake, IA, Curt (Heather) Jensen of Long Beach, California, Neal (Michelle) Jensen of River Falls, Wisconsin; his 6 grandchildren: Emily, Jonah, Hallah, and Virgil Jensen and Paxton and Clayton Lee; his brother Jerry (Cynthia) Lee; his sister Diane (Melford) Narum; his cherished four-legged companions, Cailey and Lightning; as well as many loved nieces, nephews and extended family members. He is preceded in death by his parents Allen and Ella Lee and a brother Larry (Sandy) Lee.

The family of DeWayne A. Lee created this Life Tributes page to make it easy to share your memories.

Send flowers to the Lee family.