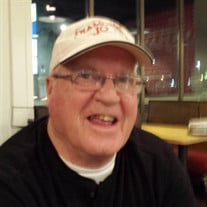 Dennis Wayne Ward, 79, was the type of person you could rely on for whatever you needed, whenever you needed it. Dennis was born June 28, 1941 to Harvey Joseph Ward and Charity Marie (Farthing). He left this earth on January 16, 2021. He was raised in Swaledale, Iowa, the oldest of a large family. He had many friends and enjoyed participating in athletics in his youth. He graduated in 1959, in a class of five students, the final year before Swaledale merged with Rockwell. He attended Iowa Teachers College in Cedar Falls for one semester. He went to work for his uncle Ed at the Conoco station in Mason City. He then took a job for the Chicago Great Western Railroad. On June 10, 1962 he married Nancy Grace (Wilson) Ward. The couple had three children, Brenda, Connie, and Daniel. In 1966 he went to work for Decker meat packing plant (Armour, ConAgra) where he worked for 38 years. During times of plant layoffs he worked for Agway, where he became a pilot and flew the company plane. He also managed the Rockwell American Legion club for a while. Dennis retired from ConAgra in 2005 but soon decided that kind of life was not for him so he joined his friend, Bud, helping with grounds keeping at the Linn Grove Country Club. Dennis was the kind of person that was just fun to be around. He was honest, generous and kind, and had a quick wit. If you asked him how he was, he always had a one-liner ready, such as, “I’m finer than frog’s hair” or “if I was any better, I’d have to be twins.” He loved to play card games of all kinds and looked forward to spending time with his friends every week playing poker. He played slow pitch softball for many years. He enjoyed golfing and “a few” trips to the casino. But above all, he loved his family. There was no question that family was what mattered and he and Nancy instilled that trait in their children. Dennis is survived by his wife of 58 years, Nancy; daughters, Brenda Campbell (Mark) and Connie Brown (Darrell); son, Daniel Ward; grandchildren, Derek Brown (Tessa), Craig Brown (Kayla), Grace Campbell, David Campbell, Danielle Ward, and Levi “Jack” Ward; bonus grandchildren, Zach and Samantha Palmer; great grandchildren, Gavin, Dax, Harper, Warren, Ace, and Khari Brown, and one arriving very soon! He is also survived by siblings, Richard Ward (Bernadette), Lester “Pete” Ward (Lora), Opal Brass (Don), and Timothy Ward (Shirley); in laws, Linda Wilson, Beth Milbrandt (Dennis), and Allan Formanek (Patty); as well as many nieces, nephews, and cousins. He was preceded in death by his parents; siblings, Nancy Thompson (Steve), infant David Ward, Christopher Ward (Barb); in laws, George and Dorothy Wilson; and sister in laws, Barbara Formanek and Janet Arndt (Robert). Dennis’ family will greet relatives and friends from 4:30 pm until 7:00 pm on Thursday evening, January 21, 2021, at Hogan Bremer Moore Colonial Chapel, 126 3rd St NE., Mason City. A brief prayer service will be held at 6:00 pm. Those in attendance are asked to wear facial coverings and practice social distancing. A private graveside service will be held at the Pleasant Valley Cemetery, rural Swaledale.

Dennis Wayne Ward, 79, was the type of person you could rely on for whatever you needed, whenever you needed it. Dennis was born June 28, 1941 to Harvey Joseph Ward and Charity Marie (Farthing). He left this earth on January 16, 2021. He... View Obituary & Service Information

The family of Dennis W. Ward created this Life Tributes page to make it easy to share your memories.

Dennis Wayne Ward, 79, was the type of person you could rely...

Send flowers to the Ward family.