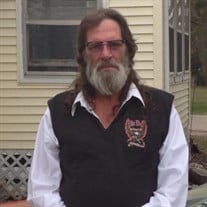 Dennis Ray Stull, Sr., 62 passed away Friday, October 22, 2021 at MercyOne Hospice of North Iowa, surrounded by family after a brief illness. A celebration of his life will be held 11 a.m. Saturday, October 30, 2021 at Hogan-Bremer-Moore Colonial Chapel, 126 3rd St. NE, Mason City with Rev. Dan Carlson officiating. Viewing and visitation will be held one hour prior to the service. Should friends desire, memorials may be directed in care of his family. Dennis Ray Stull was born May 24, 1959 in Iowa City, the son of Florence “Connie” Ruiz. Growing up in the Mason City area, Dennis attended Mason City Schools before entering the work force to help support his younger siblings. Dennis grew up fast, learning all the tricks of the trade: construction, carpentry, and roofing that he would later turn into his own business, Denny’s Total Home Improvement. In 1978 he married Roxanne Martin and they had two children, Denny Ray Jr. and Jesse James, though the couple later divorced. He later married Deb Stull and had four children, Andrew, Jessica, Angela and Samantha. They shared 33 years together before going their separate ways. One of Dennis' greatest joys in life was being a dad and was delighted to become a grandfather to his beloved grandchildren. When Dennis wasn't working or honing his tattoo skills, he loved to socialize and get to know people. He took pride in his quick wit, and never turned down the opportunity to have a good time. He enjoyed time spent working with his hands, whether it was tinkering and rebuilding his 77 FLH Police Special Harley, updating his home in Hanford or helping those in the community. Dennis truly lived life to the fullest and made sure he was living it on his own terms, not defined by other's opinions - an Outlaw of sorts. Time spent talking on the phone with those he loved and a good strong cup of "coffee" brought him great joy. Those left to cherish his memory are his children, Denny R. (Janelle) Giddings, Jr. of St. Cloud, MN, Jesse Stull of Mason City, Andrew (Brittany) Stull of Mason City, Jessica (James Burns) Alvarez of Humbolt, Angela (Tony Jass) Stull, of Mason City, and Samantha (Paul) Youngers of Rockwell; beloved grandchildren, Shianne, Yvonne, Jordis, Dominic, Carter and Raylee, Mackenzie, Olyvia, Cameron, Aiden, and Miley, Hailey, Andrew Jr. and Braelinn, Jasper, Joseph and Jianna, and Brittany, Andrew, Benton and Gracelyn; his siblings, John, Jennifer and Genio; as well as numerous extended family and friends. His dear mother, Connie, whom was one of his greatest friends in life, preceded him in death.

Dennis Ray Stull, Sr., 62 passed away Friday, October 22, 2021 at MercyOne Hospice of North Iowa, surrounded by family after a brief illness. A celebration of his life will be held 11 a.m. Saturday, October 30, 2021 at Hogan-Bremer-Moore Colonial... View Obituary & Service Information

The family of Dennis Ray Stull Sr. created this Life Tributes page to make it easy to share your memories.

Send flowers to the Stull family.