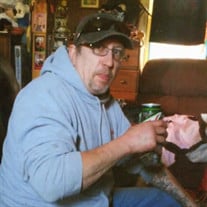 Dennis Eugene Dutcher, of Clear Lake, passed away Monday, June 13, 2022 at the University of Iowa Hospitals and Clinics in Iowa City. Visitation will be held Thursday, June 23, 2022 from 1:00 to 3:00pm at Ward Van Slyke Colonial Chapels at 310 1st Ave North, Clear Lake, Iowa. Visitors are invited to come as you are. Inurnment will occur at a later date. Dennis was born in Iowa City to parents Albert Eugene Dutcher and Elsie Martin. He was the third child of a family of four children. At six months of age, the family moved to California for 15 months before returning to Iowa. He attended Mason City and Clear Lake schools. He entered the workforce, employed in food service throughout his career, becoming a very talented cook known for his culinary artistry. Dennis was a proud father to his son Ethan. His hobbies included martial arts, fishing and driving his Ford Mustang. His love of Ninjitsu led to the building of a large collection of paraphernalia. Beyond his cooking talents, he was a painter who created murals that still exist in Clear Lake. His sense of humor was infectious and delighted family and friends. He was a great communicator known for his honesty, generosity and loyalty. The memories of Dennis’ life will be cherished by his mother, Elsie; his siblings, Tim (Melody) of Mason City, Jeff (Beverly) of Austin, MN, and Janeen Dutcher of Phoenix, AZ; his son, Ethan of Green Bay, WI; as well as his nieces, nephews, aunts, uncles, cousins and extended family. Dennis is preceded in death by his father, Albert; maternal and paternal grandparents; uncles, Robert, Bud and Jimmy; and his cousin, Ricky.

Dennis Eugene Dutcher, of Clear Lake, passed away Monday, June 13, 2022 at the University of Iowa Hospitals and Clinics in Iowa City. Visitation will be held Thursday, June 23, 2022 from 1:00 to 3:00pm at Ward Van Slyke Colonial Chapels at... View Obituary & Service Information

The family of Dennis Eugene Dutcher created this Life Tributes page to make it easy to share your memories.

Send flowers to the Dutcher family.