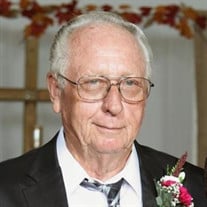 Delbert Gene Smit, 78, of Sheffield, died Wednesday, January 13, 2021, at his home surrounded by family. A private funeral service will be held Monday, January 18, 2021, at First Grace Baptist Church, 404 E. Gilman St., Sheffield, with Pastor Matt Reeves officiating. Burial will be at Hillside Cemetery in Sheffield. Visitation for family will be held one hour prior to the service at the church in Sheffield. Delbert was born June 2, 1942, the son of Henry and Tena (Koenen) Smit in Sheffield. Delbert grew up in Sheffield and graduated from Sheffield High School in 1960. He married Carolyn Evenson on December 17, 1961, in Clear Lake; they recently celebrated their 59th wedding anniversary. Delbert worked hard throughout his life to support his family. He worked at Titus Manufacturing in Waterloo until moving back to Sheffield where he owned and operated a drainage tile business with his brother, Don, and then a grain bin sales business with his brother, Dale, prior to working for Sukup Manufacturing for 25 years. Throughout his life, Delbert enjoyed being outdoors. He looked forward to deer hunting season every year, and even once he was unable to join in on the fun, he loved to hear the stories of his hunting group after a day in the timber. He spent many vacations fishing at the lake with family and friends. If he wasn’t hunting or fishing, he could most often be found visiting with people, relaxing, or gardening at his shop. His huge garden was immaculate, and there was always enough produce to share with his extended family and friends. Delbert will also be remembered by those close to him for his unique sense of humor. Delbert is survived by his wife, Carolyn Smit of Sheffield; two children, David (Mary) Smit and Sandy (Terry) Tull both of Sheffield; four grandchildren, Crystal (Jeremy) Foell, Derek (Selena Sjostrand) Smit, Ryan (Whitnee) Smit and Matthew Tull; two great-grandchildren, Abigail and Caleb Foell; four siblings, Duane Smit, Elaine (Don) Lubkeman, Mavis (Gordon) Meyer and Diane (Ted) Hughes; three sisters-in-law, Laurie Smit, Pat Smit and Sharon Smit; and many nieces and nephews. He was preceded in death by his parents; brothers, Dale, Don, Harold and Gene; sister-in-law, Ilene Smit; and niece, Janice Ward.

The family of Delbert Gene Smit created this Life Tributes page to make it easy to share your memories.

Send flowers to the Smit family.