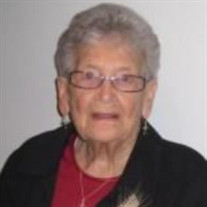 Dawn Lutz, 96, of Manly, Iowa, passed away Wednesday, August 18, 2021 at home surrounded by family in Manly, Iowa. A Memorial Service will be held 2:00 p.m. Sunday, August 22, 2021 at Bethel United Methodist Church, 503 East South Street, Manly, Iowa. With Rev. Cory Allard and Chaplin Art Zewart officiating. Inurnment will be held at a later date. Following the Memorial Service the family would like to invite family and friends to the farm for a Celebration of Life. In lieu of flowers, memorial contributions may be directed to MercyOne Hospice of North Iowa, Humane Society of North Iowa or Bethel United Methodist Church. Dawn was born December 20, 1924 in Wessington Springs, South Dakota, daughter of Ollie and Della (Zink) Jobe. She attended school in Wessington Springs. After high school, she was united in marriage to Jack Hawkins and to this union two children were born, Monte and Janie. After Jack’s passing, Dawn raised Monte and Janie. Dawn later met the love of her life Robert Lutz, while at a dance after WWII. Dawn and Robert were united in marriage on September 28, 1946 in Plankinton, South Dakota, and to this union three children were born, Janelle, Randy and Jaime. Dawn and Robert settled down on a ranch in Fort Thompson, South Dakota, where she operated Big Bend Café. Several years later, the family moved to Clear Lake in the mid 60’s and settled on a farm to raise livestock and grow crops. She was involved in the Methodist Church in Ventura until she moved to Manly in the late 60’s, where they continued to farm in the area to this day. Dawn was a lifelong member of the VFW Auxiliary and active member of the Bethel United Methodist Church in Manly. Dawn enjoyed spending time outside with her garden, being able to cook for her family. Dawn looked forward to teaching her family throughout the years how to bake bread. She loved spending time with her family and taking care of her grandchildren throughout the years. She looked forward to going to the YMCA to go swimming as well as enjoying time in her own pool. She will be remembered for her love of animals. Dawn is survived by her five children, Monte Hawkins, Janie Hawkins, Janelle (Vern) Dannen, Randy (Cheryl) Lutz and Jaime Lutz; fourteen grandchildren, Angela Sorenson, DJ Hawkins, Tina Francis, John Durgin, David Durgin, Dixie Meyer, Jeanne Lechuga, Amy Stoeffler, Kari Pate, Aaron Dannen, Lisa Roth, Jesse Lutz, Natasha Lutz-Figy, Ali Pargmann; 35 great grandchildren, 14 great great grandchildren. Dawn is preceded in death by her parents, Ollie and Della Jobe; husband, Jack Hawkins; husband, Robert Lutz; three siblings, Robert Jobe, Edrah Spielman, and Sharon Claire and their spouses; daughter in-law, Sandy Hawkins; great great grandson, Cael Subject.

The family of Dawn Lutz created this Life Tributes page to make it easy to share your memories.

Send flowers to the Lutz family.