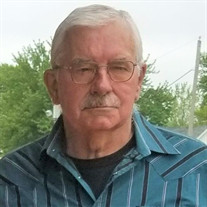 David L. Cobb Sr. passed away Monday, December 21, 2020 at MercyOne North Iowa Medical Center in Mason City, IA. A private family celebration of his life will be held at Hogan-Bremer-Moore Colonial Chapel on Tuesday, December 29, 2020. David Lloyd Cobb Sr. was born August 27, 1945, the son of Dickerson and Edith V. (Anderson) Cobb. Growing up in Northern Iowa and Southern Minnesota, David began working at a young age. He worked for Water Tower Paint and Repair, Pittsburgh Des Moines Steel, on the farm in Manly, and retired from IMI Cornelius. For many years David shoed horses in the North Iowa and Southern Minnesota areas. David was a hard working man who rarely gave himself enough time to sit down. He enjoyed time outside, whether it was hunting, fishing, or playing with the kids and grandchildren. From early on, horses were a staple in his life. David showed and raised horses for numerous years. He found great pride in caring and preparing for shows which led to his desire to go to horse shoeing school. David’s family was his world and he was his grandchildren’s biggest fan. David could be quite the jokester, even if everyone else didn’t get the joke. Those left to honor his memory are his wife of 56 years, Judy; his children, David Jr. (Lisa) Cobb of Rockwell, Donna (Scott) Asche of Mason City, and Don (Nikki) Cobb of Plymouth; grandchildren, Kendall, Amber, Andrew, David, Cooper, and Cameron; many beloved great-grandchildren; siblings, Fred Cobb, Richard Cobb, Paul Cobb, Janice Peterson, Viva Nelson; as well as numerous nieces, nephews, and extended family members. He was preceded in death by his parents and siblings, Walt Cobb and Tommy Cobb.

The family of David L. Cobb Sr. created this Life Tributes page to make it easy to share your memories.

Send flowers to the Cobb family.