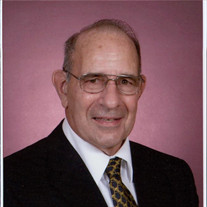 Darold Leo Elbert, 86, of Mason City, passed away at home on Friday, September 17, 2021. Mass of Christian Burial will be held 10:30am Saturday October 2, 2021 at Epiphany Parish Holy Family Catholic Church, Holy Family Catholic Church, 722 N. Adams Ave, Mason City. Burial will follow in Elmwood - St. Joseph Catholic Cemetery. Military honors will be conducted by the Mason City Veterans Honor Guard. Epiphany Parish asks all to wear face masks at church. A livestream of the Mass will be available on the Epiphany Parish Facebook page. Visitation will be Friday, October 1, 2021 from 5-7 p.m. at Hogan-Bremer-Moore Colonial Chapel in Mason City with a Scriptural Wake service beginning at 7:00 pm. Darold Elbert was born December 26, 1934 to Agnes and Elmer on the Oliver farm in Rodman, Iowa just north of McGovern farm with 8 siblings. Darold attended a one room country school till 3rd grade. In 1953 he graduated from Cylinder Consolidated Cylinder, Iowa with a class of 17. Darold played forward on the basketball team and was on the baseball team. November 1954, Darold volunteered for the draft in the Army. Darold had twenty-one jumps with the 82nd Airborne Division at Fort Bragg, N.C. Darold was in the 505th Regimental football team. After the army, Darold started his education and in January of 1963 received his BS in Mechanical Engineering from University of Iowa. Upon graduation Darold started his professional career with Goodyear Tire and Rubber Co. Darold had met June Ford while he was student at the UofI, and they were married in April 1963 who has been the love of his life for 58 years. In April of 1967 Darold and his family of five moved to Cumberland, Maryland with Kelly Springfield Tire, a subsidiary of Goodyear as Plant Engineer. In September of 1968, Darold and his family of six moved to Union City, TN, as Manager of Staff Engineering. Darold helped construct a new state-of-the-art tire plant, which became the United States largest tire plant. While in Union City, the family lived in a small subdivision, because of Darold’s interest in getting paved streets in their subdivision he agreed to serve as City Engineer to complete the project. Darold went to the University of Tennessee, evening graduate school and earned a Master Degree in Engineering Administration. The family enjoyed camping in their pickup camper and riding Honda dirt bikes. Darold also started deer hunting a sport he enjoyed for thirty-five years. In March of 1978, Darold and his family of seven moved to Mason City, Iowa to be near his family and old friends. Darold was in Professional Engineering and Plant Engineers of America, which he served as President and Vice-President. Darold was employed at Lehigh Portland Cement and as Maintenance Superintendent. Darold enjoyed the many challenges of his job. All the children attended Newman High School. The year the four girls where in high school, Darold served as President of the Newman Booster Club. He retired in on January 15, 1998. Darold and June bought a townhouse and a 34’ Hitchhiker Premier Fifth Wheel to enjoy the GOOD LIFE. Their plan is to spend every winter as a snowbird and travel the USA, Germany, England, France, Alaska, and Panama Canal. Darold and his brothers and cousin deer hunting on the Des Moines River bottom; Bushy Bijou and fishing Thunderbay, Ontario for 20-years. He was an avid golfer and enjoyed time with his friends at the Highland Golf Course. Darold is survived by his wife June (Ford) Elbert; daughters Deb Malek (Ed N/Nesha, Gabriel/Bob), Jackie/Randy Lindquist (Nichole/Jake Sorensens, Stephanie/Adan Canto , Zach/Paige), Katie/Cam Iommazzo (Kalen, Karina), Beckie Elbert (Nathan Sellards, Christian Sellards); son, Jim/Hope Elbert (Rylie, Raegan, Logan) and 10 great grandchildren.

The family of Darold L Elbert created this Life Tributes page to make it easy to share your memories.

Send flowers to the Elbert family.