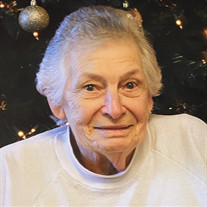 Darlys D. Kielman, 85, of Nora Springs and formerly of Rockford passed away Wednesday, January 6, 2021 at the Nora Springs Care Center. Visitation and public viewing will be held from 4:00 p.m. to 6:00 p.m. Monday, January 11, 2021 at the First United Methodist Church, 21 3rd St NW, Rockford, IA 50468. Masks will be required to enter the church and social distancing measures followed. The family appreciates your compliance and understanding. To be with the family digitally, a livestream of the visitation can be found at https://www.facebook.com/rock4umc. A Private Service for her children and their families will be led by Rev. Dennis Burns. Darlys will be laid to rest beside her husband, George, at Riverside Cemetery in Rockford. A recording of the service will be posted on her memorial page at ColonialChapels.com. Darlys Diane Shepley was born August 13, 1935 in Charles City, the daughter of John and Vivian (Thatcher) Shepley. She attended Charles City High School, graduating with the class of 1953. On February 27, 1955 she married the love of her life, George Kielman, Jr. at the Charles City Baptist Church. The couple was blessed with six children, Georgina, Tim, Karla, Kim, Chris, and Tracy. She later continued her education at NIACC, where she became an LPN in 1978. This service led Darlys to her 22 year long career at Good Shepherd, showing her true passion for caring for others. The family made their home in Rockford for numerous years where Darlys and George were active members at the United Methodist Church. In her retirement Darlys enjoyed knitting, solving word searches, and always had a good book nearby to read aloud. Together with George, they cultivated a beautiful garden, the produce from it was often canned and shared with others. Her family was her world. Darlys' greatest joy was becoming a grandmother and was blessed with so many to love. She volunteered her time at the Rockford school as a Foster Grandmother to many lucky children. Those left to cherish her memory are her children, Georgina (Rick) Chenoweth of Mason City, Tim (Cindy) Kielman of Phoenix, AZ, Karla (Jerry) Engelhardt of Marble Rock, Kim (Joel Ernst) Parcher of Mason City, Chris (Robert) Farr of Rockford, and Tracy Kielman of Rockford; grandchildren, Patrick (Melanie) Chenoweth of Anoka, MN, Nicole (Ryan) Rand of Waterloo, Tyler (Betsy) Engelhardt of Houston, TX, Tarah (Ryan) Paulus of Nora Springs, Jesse (Cassie) Parcher of Cedar Rapids, Kyle (Whitney) Parcher of Marble Rock, Dustin Kuhlemeier of Rockford, Jordan (Nick) Bruggeman of Cartersville, Dylan Kuhlemeier of Rockwell, and Heath, Blake and Elley Farr; 18 great-grandchildren; brother, Jack Shepley of Minnesota; sisters-in-law, Tilleen Litterer of Charles City, and Caroline Schafer of Greene, IA; as well as numerous nieces, nephews and extended family members. Those preceding her in death are her husband George; her parents; siblings, including John, Donald and Gary Shepley, as well as George’s parents and siblings, Henry, Otto, Lorraine, Berdine and their spouses.

The family of Darlys D. Kielman created this Life Tributes page to make it easy to share your memories.

Darlys D. Kielman, 85, of Nora Springs and formerly of Rockford...

Send flowers to the Kielman family.