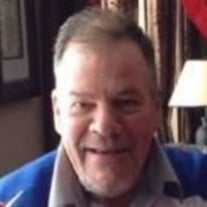 Danny D. Robertson, 60, of Mason City, died Thursday, November 19, 2020 at his home in Mason City. A memorial service will be held at 1:00pm on Saturday, May 22, 2021 at Shelburn Baptist Church 787 SW State Hwy W, Trenton, MO 64683. Condolences may be directed to Danny’s family in care of Hogan Bremer Moore Colonial Chapel, 126 3rd St NE, Mason City. The son of Dewane and Edna (Mace) Robertson, Danny Dewane was born on October 24,1960 in Trenton Missouri and grew up on the family farm along with siblings Melody and Howard. Following his high school graduation Danny enlisted in the United State Marine Corps. Danny was united in marriage to Susan Bailey in Miami, Oklahoma, inheriting two step-children, Michael and Brandy. Together they would be blessed with two more children, Matt and Tori. Becoming a father was one of Danny’s greatest joys, he was his kid’s strongest supporter and took pride in all of their accomplishments. In later years he was blessed with seven step-grandchildren and was anxiously awaiting the arrival of twin grandchildren in the next few months. Danny will be remembered for being a kid at heart, his warm and welcoming character,storytelling, and his love of travel. He had a knack of making others feel cared for and welcome around him. Those grateful in sharing in his life are his wife, Susie Roberston, Mason City; children, Matt(Heather Lemke) Robertson, Mason City, Tori (Dane Tillman) Kansas City, MO, Brandy (Jeff) Rothmund, Lake Elmo, MN, and Michael (Mandy) Grijalva, Denver, CO; his many beloved grandchildren; and his siblings, Melody (Gary) Frank, Wardsville, MO, and Howard (Pam) Robertson, Chillicothe, MO; as well as extended family and many friends. He is preceded in death by his parents, Dewane and Edna Robertson.

The family of Danny D. Robertson created this Life Tributes page to make it easy to share your memories.

Send flowers to the Robertson family.