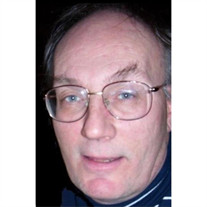 Danny John Degen, 71, a Mason City native, passed away suddenly on January 20, 2022, at his home in Des Moines. Danny was born on January 21, 1951, the son of John and Doris Miller Degen. Dan was a second generation American, the descendant of Degen and Miller families who immigrated to Illinois, Pennsylvania, and Minnesota in the late 1800’s from Germany and England. Danny graduated from Mason City High School and received a Bachelor of Arts degree from the University of Iowa. Following graduation, he worked as a writer and proofreader of wartime scenarios for Unisys, a Department of Defense contractor, in Iowa City and California before returning to Iowa. He was employed by the State of Iowa as a legislative department analyst and proofreader. In that capacity, he made sure that the final printing and publication of new laws met grammatical and legal standards. He is survived by three brothers, Thomas of Vacaville, California; Larry and his wife, Catherine, of Rockwell, Iowa; and Richard, of San Antonio, Texas. He is also survived by many nieces and nephews and their families: John and Jodie Degen of Rockwell, Iowa; Debora and Eric Powers of St. Ansgar, Iowa; Michael and Lisa Degen, of Mason City, Iowa; Robert and Julie, of Rochester, Minnesota; Andrew and Jackie Degen, of Springfield, Missouri; Kathleen McFee, of Davis, California; and Jennifer and David Kukis, of Davis, California. He is also survived by his cousin David Degen, of Fort Dodge, Iowa, and his family. He is deeply missed by his very dear friends, Raelee Degen of San Antonio, Texas; Teri Stubbs of Burlington, Iowa; Linda Peters of Des Moines, Iowa. He was preceded in death by his parents, and most recently by his sister-in-law Gloria Degen, and close friend and cousin, Leonard Degen. A graveside service will be held at 10:30 a.m. on Thursday, January 27th, at Elmwood-St. Joseph Cemetery in Mason City. A gathering and lunch will follow at the Sacred Heart Parish Hall in Rockwell.

Danny John Degen, 71, a Mason City native, passed away suddenly on January 20, 2022, at his home in Des Moines. Danny was born on January 21, 1951, the son of John and Doris Miller Degen. Dan was a second generation American, the descendant... View Obituary & Service Information

The family of Danny J. Degen created this Life Tributes page to make it easy to share your memories.

Send flowers to the Degen family.