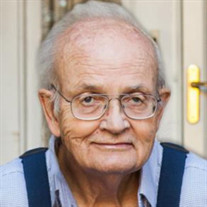 Mason City - Dallas Edward “Duffy” Robinson, 80, of Mason City, passed away Monday, April 26, 2021 at the MercyOne North Iowa Hospice with his family at his side. In honor of Dallas' wishes, a private family committal service will be held at a later date. Dallas Edward Robinson was born April 9, 1941 in Mason City, the son of James Edward and Willene O. (Myrell) Robinson. Growing up in the Mason City area, Dallas graduated from Mason City High School, and continued his education at Dunwoody Institute in Minneapolis where he earned his degree in carpentry. In 1979 he married Dianne Solberg at the Little Brown Church. Dallas worked at Deckers for ten years. Dallas had a passion for building, whether it was small projects or houses, contracting brought him joy. In pursuit of this love, Dallas dedicated his life to the creation and success of Robinson Construction and later Robinson Overhead Door. In 2005 his son, Chris, was able to carry on the legacy and continue the business. Though Dallas was still often found in the background, not fond of the idea of retirement, he took great pride in the company's work and enjoyed overseeing projects. Dallas was not one to sit idle, his hands were constantly working on a project or preparing for the next job. He was a skilled carpenter and enjoyed creating pieces for his family. Dallas fought a courageous battle with Parkinson's, learning new ways to do the things he loved. Though it was a hard battle, he took great pride in watching his craftsmanship and love for building be passed on to his children and grandchildren. As they got to keep a little piece of Dallas that will always be here with us. Those left to cherish his memory are his wife of 42 years, Dianne; his son, Chris Robinson of Mason City; his daughter, Julie (Ben) Lewerke of Johnston, IA and their children, Hudson, Riley and Drake; step-son, John (Becky) Robinson and their children, Austin, Raquel, and Lexus; a sister, Scarlet Drehmel; brother and sister-in-law, Lowell (Marj) Solberg and Patricia (Jon) Fisk; as well as nieces, nephews, extended family members and friends. Preceding him in death are his parents, James and Willene; a brother-in-law, Wayne Drehmel; maternal and paternal grandparents; as well as extended family members and friends. Hogan-Bremer-Moore Colonial Chapel. 126 3rd St. NE, Mason City, IA 50401. (641) 423-2372. ColonialChapels.com

Mason City - Dallas Edward &#8220;Duffy&#8221; Robinson, 80, of Mason City, passed away Monday, April 26, 2021 at the MercyOne North Iowa Hospice with his family at his side. In honor of Dallas' wishes, a private family committal service will... View Obituary & Service Information

The family of Dallas E. Robinson created this Life Tributes page to make it easy to share your memories.

Send flowers to the Robinson family.