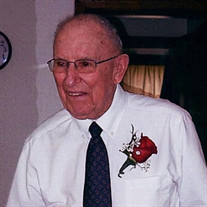 Dale O. Marsh, 98, of Clear Lake, died Thursday, February 11, 2021, at Oakwood Care Center in Clear Lake. Funeral services will be held at 2:00 p.m. Tuesday, February 16, 2021, at Clear Lake Christian Church, 302 Hwy 18 W., Clear Lake, with Rev. Drew Rietjens officiating. Burial will be at Clear Lake Cemetery. Dale’s funeral can be live streamed on the church’s YouTube channel, ClearLake ChristianChurch, and also viewed following the service on his tribute page at www.colonialchapels.com. Visitation will be one hour prior to the service at the church. Family suggests memorial contributions to MercyOne North Iowa Hospice in Mason City or Clear Lake Christian Church. Dale was born August 4, 1922, the son of John and Maude (Olinger) Marsh in Story County, IA. He married Velma Hyde and to this union Janice and John were born. He married Delpha Arline Doss in January 1966 in Mason City. She preceded him in death in 2013. He later married Carolyn Ahrens on August 14, 2015, in Clear Lake. A graduate of Ventura High School, class of 1939, Dale received a letter for playing baseball. He farmed north of Ventura and later Clear Lake for most of his life until retirement in 2002. During his life, Dale remained very active in the community with various clubs and organizations. He was a 50 year member of the Verity Lodge 250 in Clear Lake, past Worshipful Master of the Benevolence Lodge #145 in Mason City and a past High Priest of the Royal Arch Masons. He was a member of the Clear Lake Christian Church where he served as Deacon, Trustee, Elder, Elder Emeritus and board member, served on the Clear Lake School Board, Clear Lake Farmers Co-op Board and was a 4-H Club leader. Dale is survived by his wife, Carolyn Ahrens-Marsh of Clear Lake; children, John (Caryll) Marsh of Bellevue, NE and Cheryl “Cherry” (Dick) Hayes of Clear Lake; step-children, Michael (Lisa) Ahrens of Kirksville, MO, Mark (Teresa) Ahrens of Cedarburg, WI and Matthew (Barb) Ahrens of Blandon, PA; many grandchildren, great-grandchildren and great-great-grandchildren; son-in-law, Dean Scheffert of Indianola, IA; and many nieces and nephews. He was preceded in death by his parents; wife, Delpha “Arline”; children, Doug Doss and Janice Scheffert; grandchildren, Steve Scheffert and Erica Benson; and siblings, Martha Buck and Al Marsh.

The family of Dale Olinger Marsh created this Life Tributes page to make it easy to share your memories.

Send flowers to the Marsh family.