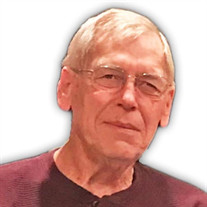 Claude L. Funk, 78, of Mason City died Monday, March 8, 2021 at MercyOne North Iowa Medical Center. Funeral Services will be 10:00 a.m. Friday, March 12, 2021 at the Hogan-Bremer-Moore Colonial Chapel, 126 3rd St. NE, Mason City, IA 50401. He will be laid to rest beside his wife, Marcia at Elmwood-St. Joseph Cemetery, Mason City, IA. Visitation will be from 5:00 p.m. to 7:00 p.m. Thursday, March 11, 2021 at the funeral chapel. Memorial contributions may be directed to the family and charities will be chosen in the future. Claude L. Funk was born September 28, 1942 in Mason City, the son of Phillip and Iona “Suzie” (Schaer) Funk. Growing up in the Mason City area, he attended Mason City High School, graduating with the class of 1961. Soon after, Claude began his faithful service with the United States Navy. On October 26, 1975 he married the love of his life, Marcia Merriss. Claude continued his service to his community as a firefighter for the Mason City Fire Department for over twenty years until his retirement in 1990. In his retirement he worked for Hawkeye Autobody and later Mercy Hospital. His greatest joy in life was his family. His daughters, Michelle and Kelly, brought him great joy, along with his sons-in-law, Matt and Josh, who became his own. Together with Marcia, the two were staples at their grandchildren's events and sports. Claude found peace in the outdoors, whether it was family trips to Lansing or traveling to watch the grandkids’ sporting events. Claude also enjoyed time at the casino, car rides to “blow the stink off”, a good western, and most of all playing cards with his family and friends. Claude and Marcia were longtime members of Epiphany Parish - St. Joseph Catholic Church. Those left to cherish his memory are his daughters, Michelle (Matthew) Verdon, Blue Grass, Iowa and her children, Aubrey, Makenna, and Mya; Kelly (Joshua) Kratz, Mason City, Iowa and her children, Caden and Sammy; Julie Edwards and Brenda Todd and their families; a sister, Delores Van Horn; a brother, John (Sandy) Funk; a brother-in-law, Kenneth Merriss; as well as many nieces, nephews and extended family members. Greeting him in Heaven are his wife, Marcia and his parents, Roy and Iona “Suzie” Johnson and Phillip Funk; Marcia’s parents, Kenneth and Mae Merriss; as well as numerous extended family members.

The family of Claude L. Funk created this Life Tributes page to make it easy to share your memories.

Send flowers to the Funk family.