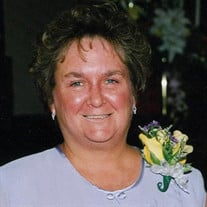 Cindy Stanley, 64, of Plymouth, passed away Wednesday, December 8, 2021 at her home in Plymouth. A memorial service will be held 4:30 pm Monday, December 13, 2021 at Hogan Bremer Moore Colonial Chapel, 126 3rd St NE, Mason City. Cindy’s family will greet relatives and friends from 3:00 until 4:30 on Monday at the funeral home. The only child of Alfred and Shirley (Gruben) Burke, Cindy was born on March 19, 1957 in Mason City. She grew up in the Rock Falls area and graduated from Nora Springs Rock Falls High School among the class of 1975. While a junior in high school, Terry Stanley relocated with his family from Marshalltown to Nora Springs, where Cindy met Terry. In June of 1975 the two were united in marriage at the Old Stone Methodist Church in Rock Falls. Together Cindy and Terry would welcome a daughter and son, Jamie and Josh, and be blessed to share 46 years of marriage with one another. For many years Cindy worked for the Globe Gazette in the classified section and in later years found her niche helping others through her work in prosthetics. First, with Hanger Prosthetics and Orthotics and then with Clark Prosthetics until her retirement, both in Mason City. In her free time Cindy loved spending time with her family and friends. She was an accomplished quilter and loved being able to gift quilts to each of her grandchildren, as well as family and friends alike. And countless hours were spent outside in her vegetable garden, which somehow always seemed to grow larger year after year! Cindy will be deeply missed by her husband, Terry; daughter, Jamie (Mike) Jensen, and their children, Zach Schmidt, Dylan Jensen, Reawna Jensen, and Isabel Jensen; son, Josh Stanley and his girlfriend, Jaime, and his children, Shaylynn, Taryn, and Gaven Stanley; step sisters, Janet Francis and Deb Buland; and brothers and sisters in law, Susie (Don) Hamiel, Sandy (Jerome) Vigdahl, John (Mary) Gross, and Jeff (Kristy) Stanley; as well as many nieces, nephews, extended relatives and friends. She is preceded in death by her parents, Alfred and Shirley; step father, Ralph Muth; and maternal grandparents, Ray and Alice Gruben.

The family of Cindy Stanley created this Life Tributes page to make it easy to share your memories.

Send flowers to the Stanley family.