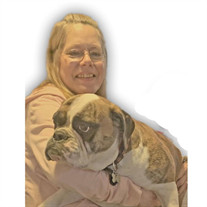 Christine A. Quinn, 57, of Mason City, passed away Tuesday, April 5, 2022 at her home in Mason City. A Celebration of her Life will be held Saturday, April 9, 2022 from 3:00 pm until 6:00 pm at Hogan Bremer Moore Colonial Chapel, 126 3rd St NE, Mason City. Should friends desire, condolences and memorials may be left to Hogan Bremer Moore Colonial Chapel in care of Christine’s family. Christine Ann Nelson was born April 30, 1964 in Waseca, MN, the daughter of Devon and Sherri (Heil) Nelson. She grew up in Mason City and attended Mason City High School. Following high school Chris worked as a server and bartender for many years, most notably at Sallee’s and the Poodle Bar. For the last 15 years she worked for Opportunity Village in Clear Lake. On May 20, 2000 Chris was united in marriage to Dave Quinn in Mason City. They were blessed with 17 years of marriage before Dave’s death on October 7, 2017. Together they enjoyed attending races at the I35 Speedway and spending as many summer nights as able camping at various campsites across northern Iowa. In her younger years Chris enjoyed crafting, making home décor, and preparing flowers for family weddings. She was also a talented painter and enjoyed painting ceramics. Chris adored her children and grandchildren and spent as much time as possible with them and her beloved bulldog, Demi. She was also blessed to maintain lifelong friendships with “her girls” and looked forward to their annual girl’s trip; they were a constant source of love and support, especially through the last few years. She is survived by her children, Trent (Amanda) Puentes, Ankeny, Travis (Erica) Puentes, Mason City, and Britany Puentes, Des Moines; Dave’s children, Scott Quinn, Jamie Busch, and Jarrod Quinn; her parents, Devon and Sherri Nelson; her beloved grandchildren, Ian and Gabby Puentes, Jaden, Kailey, Gavin, and Eilana Puentes, Carter and Amelia Kral, Selena Peterson, Brookyln O’Dell, Charlotte and Mia Quinn, and Emma Busch; brothers, Dean and Brian Nelson; as well as Chris’ extended family and many friends. She is preceded in death by her husband, Dave Quinn; and siblings, Terry Walter and Darren Nelson.

The family of Christine A. Quinn created this Life Tributes page to make it easy to share your memories.

Christine A. Quinn, 57, of Mason City, passed away Tuesday, April...

Send flowers to the Quinn family.