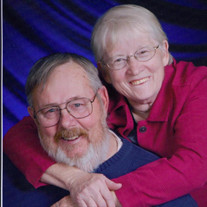 Chris “Cheezburger” and Anita Andersen of Mason City passed away Saturday, September 4, 2021 due to injuries sustained in an automobile accident. A Funeral Service will be held 10:00 am Saturday, September 11 at First United Methodist Church, 119 S. Georgia Ave., Mason City with Rev. C.A. Kress officiating. Burial will follow in Maynes Grove Cemetery, rural Bradford. Those in attendance are encouraged to wear facial coverings and practical social distancing. For those unable to attend, a livestream of the service will be available through the First United Methodist Church Mason City Facebook page. Visitation will be held Friday evening, September 10, from 3:00pm until 7:00pm at First United Methodist Church. Chris Andrew was born on June 8, 1944 in Iowa Falls to parents Grant and Katherine (Anderson) Andersen. He grew up on the Popejoy farm and attended Alden High School where he wrestled, played football, baseball, and lettered in cheerleading before his graduation from in 1962. Chris joined the United States Air Force following his high school graduation. Anita Ann was born on April 25, 1945 in Iowa Falls to parents August and Virginia (Zerble) Hartwig. Anita attended schools in Hampton and Iowa Falls and enjoyed singing in the school choir. Anita’s parents managed the skating rink in Iowa Falls and fate brought them together one night after Anita needed a ride home from the rink. The two quickly became inseparable and on June 20, 1965 the two were wed at the United Methodist Church in Bradford. After many moves within the United States Air Force, Cheezburger and Anita settled in Hampton and Cheezeburger worked for Franklin County for twenty years until his first retirement. Following retirement Cheezeburger drove school bus for Hampton Dumont schools and Waldorf College. Anita kept busy working for various retail jobs in Hampton, raising three young children and attending all their school events. The young family stayed active within the Faith Baptist Church in Hampton. Following their children’s high school graduations, Cheezeburger and Anita moved from Hampton to Coulter where they resided for 15 years. For many years they operated Old Library Antiques in Coulter and traveled the Midwest doing antique shows. In 2003 they opened Andersen’s Produce and Antiques in Mason City. After several relocations they settled at their current location on 19th St. and grew to include plants, produce, flowers and seasonal items. Cheezeburger and Anita turned the store over to their kids in 2016 but still kept busy at the store throughout all these years. Many patrons will miss Cheezeburger’s wit and jokes and the twinkle in Anita’s eye as she helped them select the perfect flower for their home. Countless days were spent with grandchildren, whether at the area farmer’s markets or at the family store. They were always traveling to watch the grandkid’s school events and special activities. No matter how tired or busy the day had been, time was always made for family and friends. Cheezeburger and Anita fostered many friendships through their business, church friends, and groups. Anita stayed busy with the Rake and Hoe Garden Club, UMW, and Questors while Cheezeburger was a leader at First United Methodist where he helped arranged many garage sales and Harvest Festivals. He also volunteered with Anita’s groups. Both were committed to the community through the Mason City Community Betterment Association. Those grateful in sharing in their lives are their children, Susan (Tim) O’Connor, Thornton, Mike Andersen, Mason City, and Chris Andersen, Mason City; grandchildren, Katie (Tim) Anderson, Jeffrey Andersen and his fiancé, Sydney, Anna Andersen, and Blaze Andersen; great grandchildren, Hayden and Raya Kleinschmidt and Gus Anderson; Anita’s sister, Judy (Rick) Branan; Chris’ siblings, Judy (Gabby) Andersen, Bev Ford, Cathy (Chuck) VanWinkle, III, Dale (Kathy) Andersen, Gloria (Tom) Zimmerman, Darla Andersen, Marshall (Linda) Christensen, and Kelly Christensen; sister in law, Diane Andersen; as well as several nieces and nephews and extended family; Cheezeburger and Anita will also be greatly missed by their Mennonite family who they’ve come to know and love over the last 20 years. Chris and Anita are preceded in death by their parents, Grant Andersen, Kathryn (Raymond) Christensen, and August and Virginia Hartwig; Chris’ brothers, John “Bear” Andersen and Jeff Christensen.

Chris &#8220;Cheezburger&#8221; and Anita Andersen of Mason City passed away Saturday, September 4, 2021 due to injuries sustained in an automobile accident. A Funeral Service will be held 10:00 am Saturday, September 11 at First United Methodist... View Obituary & Service Information

The family of Chris and Anita Andersen created this Life Tributes page to make it easy to share your memories.

Chris “Cheezburger” and Anita Andersen of Mason City passed away...

Send flowers to the Andersen family.