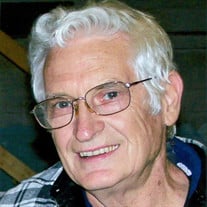 Charles Marshall “Chuck” Christeson, born December 14, 1936 in Princeton, Kansas died January 21, 2022, age 85, at MercyOne North Iowa Hospice in Mason City, after a long battle with COPD. He was preceded in death by his parents, Mearle and Esther (Harkins) Christeson, twelve siblings, and his wife of 31 years, Mary (Binns) Christeson. Chuck is survived by his son, Rick (Bev) Christeson of Manly, Iowa and their children, Joe Christeson, Candi (Cody) Winter (Race and Hadley) and Mike Rainer, son Dan (Sandy) Christeson of Mason City, Iowa and their children Todd (McKenzie) Christeson (Rayna, Shane, and Quinn) and Eveejo Christeson Goll (Jakob), daughter, Mikki Jennings of Wake Village, Texas and her children Aaron (Devin) Jennings and Autumn (Josh) Williams, son Chris (Stephanie) McDannel of Ocala, Florida and their son, Joe Berry (Baloo and Isla), daughter, Daina (Tim) Land of Redwater, Texas and their children, Cody Land, Zak (Liz) Land, Emma Land (Lorjust), Joshua Land, and Abigail Land, and daughter, Michelle McDannel Barron of Ocala, Florida and her daughter, Jamilee; brother-in-law, Floyd (Georgie) Binns; sisters-in-law, Sadie (Robert) Echelbarger and Sally Christeson; numerous nieces and nephews; and good friend and neighbor Margaret Christensen. Chuck grew up on the farm in Kansas and had his own business delivering milk with his Milk Truck. He moved to the Mason City area with then wife, Betty JoAnn (Lindberg) and son Rick in 1961. He married Mary Lzona (Binns) McDannel from Des Moines, Iowa in 1976, and worked for many years at the Soy Bean Plant in Mason City before working at Eaton Corp, Belmond, as a machinist, where he retired. Chuck loved being outdoors, was an avid camper, enjoyed boating, fishing and most importantly spending time with his family and friends. Back in the 60’s Chuck and good friend Jim Klunder worked on a race car together. Jim drove it and Chuck was the mechanic. He also had a great love of dogs and has, for most of his life, had a devoted canine companion. He was known for his great compassion, kind and giving heart, friendly demeanor and was happiest when helping others. The family is greatly indebted to the wonderful staff at MercyOne Hospice, especially in-home hospice nurse, Vicki. Per Chuck's wishes, his body has been cremated and a Celebration of Life will be held at a later date.

The family of Charles "Chuck" Marshall Christeson created this Life Tributes page to make it easy to share your memories.

Send flowers to the Christeson family.