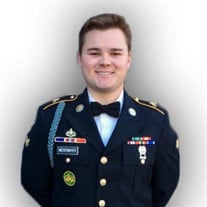 Carter James Niedermayer, 25 of Hewitt, TX, formerly of Mason City, died Saturday, July 31, 2021, at his home. Funeral services will be held at 10:30 a.m. Monday, August 9, 2021, at the First Congregational United Church of Christ, 100 1st St. NE, Mason City with Rev. Karen Young officiating. Burial will be at Elmwood-St. Joseph Cemetery in Mason City, where military honors will be rendered by the Mason City Veterans and United States Army. Visitation will be from 2:00-4:00 p.m. Sunday, August 8, 2021, at Hogan-Bremer-Moore Colonial Chapel, 126 3rd St. NE, Mason City. In lieu of customary remembrances, memorials may be directed to the Newman Catholic Schools Tuition Assistance Program. Carter’s smile lightened every room he entered. He adored Meagan, Maddie, Bobby, his parents, Meagan’s parents, and his many friends and relatives. He was every little cousin’s favorite playmate and the games they played elicited squeals of delight heard everywhere. Like all of us, he struggled with some of life, but his struggles were diminished in the face of the love, fun, and sunshine he shared. Carter entered this world on May 13, 1996, and the world was a different place. He roared through life on the wrestling mat, the baseball diamond, the football field, and the golf course. Jenny and Jon took him to youth wrestling tournaments beginning when he was 5 years old. They went all over for baseball, and they became part of the fun group of families who followed their kids’ baseball exploits around the Midwest. He excelled at Newman Catholic High School on the football field and though the opposition was sometimes fooled by his small stature, by the end of the game, they knew they had met their match in this little running back. He played on the Newman golf team and golf continued to be his passion into his adult life. He had great fun at the lake with Ed, Nick, and Uncle Davee at the Whitefish Golf Course, and he was elated when he occasionally waxed them. He graduated from Newman Catholic High School in 2014, attended NIACC, and then enlisted in the United States Army. He was stationed at Fort Hood where he met the love of his life Meagan. He was soon deployed to Afghanistan where he served his country honorably. While serving, he suffered a heart attack and spent several weeks at Walter Reed in Washington, DC, and then returned to Fort Hood to recover. He received a medical discharge and was looking forward to entering a program this fall in Waco to be trained to be a radiologic technician. He and Meagan planned their wedding for March 12, 2022. Carter left this earth sometime in the early morning of Saturday, July 31. His family and friends are overwhelmed with the loss. Many are left to mourn Carter; his fiancée Meagan Marquez, and her parents Maria and Roland Marquez of Hewitt, Texas; his mother and step-father Jennifer and Ed Mikkelsen, his father and stepmother Jon and Colleen Niedermayer, his sister Maddie Ann (Austin) Thoms, brother Robert Francis Niedermayer, all of Mason City; and many aunts, uncles, cousins and friends. We know Carter has found peace at last and is resting in the arms of God. Carter was preceded in death by his maternal grandparents Jim and Virley Heine, paternal grandparents Sally and Robert Niedermayer, step grandfather Edward Mikkelsen Sr., step grandparents Richard and Louise Kelly, uncle, Robert William Niedermayer, and uncle, Mark Niedermayer.

The family of Carter James Niedermayer created this Life Tributes page to make it easy to share your memories.

Send flowers to the Niedermayer family.