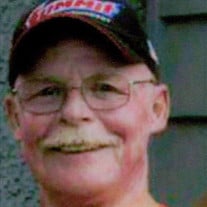 Bruce Edward Seward, 68, passed away Wednesday, November 4, 2020, in his Mason City home surrounded by loved ones. Per Bruce’s wishes his body has been cremated and no services will be held at this time. Bruce was born on August 22, 1952, the son of George and Betty Jean (Teepe) Seward of Mason City, IA. He was a graduate of Mason City High Schools Class of 1970, after graduation he served his country in the Marines until 1974. On May 21, 1977 Bruce married Penny Sue Marsh at Trinity Lutheran in Mason City, IA, to this union two children were born. Throughout his work lifetime Bruce worked as a heavy equipment operator. Bruce was an avid outdoorsman who enjoyed many activities, hunting, fishing, and four wheeling. He also was a big supporter of the Mason City Motor Speedway as well as NASCAR. Not only did he enjoy watching races, he had the skill of fixing up cars, especially his 68 Chevy Nova SS. When Bruce wasn’t spending time outdoors he could be found spending time with his wife, family and dogs. Bruce loved his family unconditionally and would do anything for them. Those left to cherish memories of Bruce are his wife of 43 years, Penny; children, Jayson Seward, Natalie (Jeremy Dodge) Seward; grandchildren, Hunter Seward, Kaitlyn Seward and boyfriend Matthew Wilson, KaiLana Seward and Lilliana Seward; siblings, Becky (Sherman) Shook, Terri Kolar, Sherri Waymier and Jan (Kevin) Harned; great friends, Steve and Cathy Brower, Dan and Doris Lugg, and Becky Krause; brothers-in-law and sisters-in-law; as well as numerous nieces and nephews. Bruce is preceded in death by his parents, mother and father in-law, Harold and Lillian Marsh; brothers, Scott and Dan Seward; and great friend, Gary Krause.

Bruce Edward Seward, 68, passed away Wednesday, November 4, 2020, in his Mason City home surrounded by loved ones. Per Bruce&#8217;s wishes his body has been cremated and no services will be held at this time. Bruce was born on August 22,... View Obituary & Service Information

The family of Bruce Edward Seward created this Life Tributes page to make it easy to share your memories.

Send flowers to the Seward family.