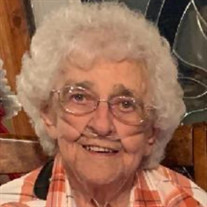 Bonnie Dee Sorber, 84 of Clear Lake, died Wednesday, February 2, 2022, at The Meadows in Clear Lake. Funeral services will be 10:30 a.m. Monday, February 7, 2022, at Ward-Van Slyke Colonial Chapel, 310 1st Ave. N., Clear Lake with Mark Doebel officiating. Burial will be at Memorial Park Cemetery in Fort Dodge. Visitation will be held from 3:00-5:00 p.m. Sunday, February 6, 2022, at the funeral home in Clear Lake. Bonnie was born August 3, 1937, the daughter of Otis W. and Bereneice (Ford) Carpenter in Homer, IA. She married Harlan Sorber on December 8, 1957, at the Christian Church in Webster City. He preceded her in death on June 10, 1975. Bonnie grew up attending school in Lehigh, IA and graduated from Rowan High School in Rowan, IA. She began working for the United States Navy Department at the Pentagon in Washington, D.C. shortly after high school and would eventually meet her husband, Harlan, there. They eventually moved back to Iowa, and after completing ERTI Business School in Omaha, Bonnie worked nearly 25 years for Massey Ferguson. She later moved to Clear Lake in 1994, where she was a cook at the Senior Citizens Center, Clear Lake High School and a local diner. Bonnie took great pride in being a founding member of Harvest Bible Chapel in Clear Lake and remaining active as a Clear Lake Lioness in various roles. For several years she also enjoyed breeding Pug dogs. Bonnie is survived by her nephews, Kimberly (Lorrie) Jones of Redfield, IA, Michael (Julie) Jones of Charles City, IA, Matthew Carpenter of Georgia and Wayne Carpenter of Georgia; niece-in-law, Diane Jones of Ventura; and many great-nieces and great-nephews. She was preceded in death by her parents; husband; brother, William Carpenter; sister, Myrleen (Wendel) Jones; and nephew, Timothy Jones. Bonnie’s family would like to express sincere appreciation and gratitude to Shannon Schwenn for all her loving care shown to Bonnie.

The family of Bonnie Dee Sorber created this Life Tributes page to make it easy to share your memories.

Send flowers to the Sorber family.