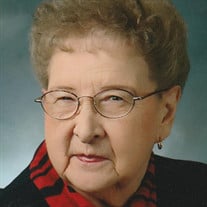 Betty A. Heyer stepped through the gates of heaven into eternal life with her Savior on January 24, 2018 at the Titonka Care Center. A Celebration of Life service will be held on Saturday, January 27th at 10:00 am at the First Congregational Church in Buffalo Center. Family will greet guests one hour before and also after the service. Betty Alice Aukes was born December 2, 1926 to Theodore and Elsie (Koolhof) Aukes on the home place south of Buffalo Center. She attended Grant #4 country school through eighth grade and entered Buffalo Center High School in 1940, the year of the Armistice Day blizzard. She took “Normal Training” as a high school class to prepare her to teach country school. She was granted an emergency teaching certificate at age 17 due to the teacher shortage during WWII and graduated from Buffalo Center High School with the Class of 1944. Betty taught at Grant #9 during the 1944-45 school year to earn money to attend the first summer session at UNI in Cedar Falls in 1945. After the UNI session, she worked at Hinson’s in Waterloo making cartridge belts for the war effort until V-J Day in August 1945. She remembered the country’s relief and celebration on this day, including the dancing in the streets. Hinson’s closed the next day and she came home to teach country school for 1 ½ years, including at Grant #5, where North Iowa Schools students continue to learn about country schools. Betty married Alfred Heyer, the boy next door, on February 28, 1947 at First Congregational Church in Buffalo Center and she worked at Wilson’s Grocery Store. Al & Betty purchased the Ice Cream Shop in April, 1951 where they served three meals a day, six days a week (currently the corner of Murra’s Hardware). They sold that business and farmed near Buffalo Center, later near Titonka and then moved to a farm west of Rake in March 1958 where they also milked registered Guernsey dairy cows. Betty loved being a very busy farm wife. Al & Betty became parents of Kevin Alroy, Kirk Allen, Keith Alfred and Kathleen Alyse. On June 20, 1958, Alfred was killed in a car-train accident near Rake. Betty moved her family into Buffalo Center to the home she lived in until August 2015 when she moved to the Titonka Care Center. When her children were in their teens, Betty’s home was full of their friends and was known as “Heyer’s Hotel”. In the early 1970s, Keith’s friend, Ron Helgeland, joined the family and remains a devoted son and brother. Betty was very active in the Congregational Church, serving in many roles--Sunday School and VBS teacher, Kings’ Daughters leader, Bible Camp counselor and cook, and as church secretary. In 1973 Betty helped establish the Buffalo Center Area Christian Women’s Club (CWC), a Club that continues to meet monthly. She also traveled to many states as a speaker for CWC, sharing her testimony that with Jesus, “You Can Make It”. She adored her grandsons and shared many hobbies. She enjoyed traveling and reading. Betty led and attended many Bible studies in the church and community where she loved to share her faith in Jesus Christ. Over the years, she offered counsel, encouragement and prayer to callers at KYJY radio. Preceding her in earthly death were her husband, Al (1958); sons Kevin (2006), Kirk (2016), and Keith (2011); parents Ted and Elsie Aukes; brothers Edwin, Harvey, Kenny and baby Richard Aukes; parents-in-law George and Gesina (Janssen) Heyer; brothers-in-law Harvey, Lawrence, Cecil, James and Gordon Heyer; sisters-in-law Mary Aukes Smith, Iona Sachs Aukes and Marilyn Harms Heyer. Grateful to have shared her life are her daughter, Kathi & Mark Nelson of Buffalo Center; and son, Ron Helgeland of Cedar Rapids; three grandsons, Spencer Nelson, Reese Nelson and Alex Helgeland; sister Ramona Aukes Heyer; brother Roger & Carol Aukes; sisters-in-law Donna Aukes and Florence, Kathy and Lois Heyer; many nieces and nephews who called her “Auntie Betty” (one of two “Little Dutch Aunties”), several cousins and many treasured friends. “Trust in the Lord with all thine heart and lean not unto thine own understanding. In all thy ways acknowledge Him and He shall direct thy paths.” Proverbs 3:5. The family would like to thank you for the kindness shown to Betty and us at this time. In Lieu of individual thank you notes, the postage saved will be given as a memorial to the Global Ministry, Network Beyond. Memorials given, unless specified otherwise, will also be given to Network Beyond.

Betty A. Heyer stepped through the gates of heaven into eternal life with her Savior on January 24, 2018 at the Titonka Care Center. A Celebration of Life service will be held on Saturday, January 27th at 10:00 am at the First Congregational... View Obituary & Service Information

The family of Betty Heyer created this Life Tributes page to make it easy to share your memories.

Betty A. Heyer stepped through the gates of heaven into eternal...

Send flowers to the Heyer family.