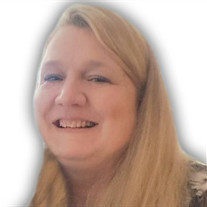 Becky Sue Bull, 54, passed away peacefully on Thursday, December 31, 2020, at MercyOne North Iowa Hospice, Mason City, IA. A memorial service will be held 2:00pm Saturday, January 9, 2021, at Grace Church, 440 N Illinois Ave, Mason City, IA, with Pastor Scott Davis officiating. Inurnment will be at Memorial Park Cemetery, IA. Visitation will be one hour prior to the service from 1:00pm to 2:00pm Saturday, January 9, 2021, at Grace Church, 440 N Illinois Ave, Mason City, IA. The daughter of Calvin and Ella (Eekhoff) Josten, Becky Sue was born on March 8, 1966 in Britt, Iowa. She grew up on the family farm in Ventura along with her siblings, James, Dean, and Karen. She attended Ventura High School where she was active within FFA and 4-H. While in high school Becky served as the first female president of the Ventura FFA chapter and showed cattle at the county fair. Becky also earned the title of Fair Beef Queen. Following her high school graduation Becky attended Northwestern College before transferring to Buena Vista University where she earned a Bachelor’s degree in Banking and Finance. On May 10, 1991 Becky was united in marriage to James Bull at Grace E Free Church in Mason City after meeting one another at a Back 40 dance in Mason City. Together they were blessed with two sons, Branson James and Mitchell Guy Bull. Becky and Jim enjoyed raising their family in Mason City and built their dream home in 2001. Family always came first and foremost for Becky; it defined her. In later years Becky returned to Buena Vista University and earned an additional Bachelor’s degree in Accounting. Becky’s passion for finance and her love of numbers led her to the banking world and throughout the years she worked at First Citizens National Bank, Boatmen’s Bank, and Iowa Heartland Credit Union. She also worked in finance for MercyOne North Iowa, and North Iowa Community Action. For many years Becky has been a member of Grace Church and Life360 Conway. Becky also played in two separate bell choirs alongside her friends, playing at numerous Nursing Homes, churches and events. Although quiet and soft spoken, Becky was quick with a smile and regardless of her endeavor always led with her heart. Those grateful in sharing in her life are her husband, Jim; sons, Branson of Mason City and Mitchell of Newton; mother, Ella Josten; father and mother in law, Willis and Patricia Bull; siblings, James (Carol) Josten, Des Moines, Dean (Mim) Josten, Ventura, and Karen (Doug) Factor, Mason City; brothers in law, Russell (Lynnanne) Bull, Plymouth, and David (Ann) Bull, Springfield, MO; as well as extended relatives and many friends. Becky is preceded in death by her father, Calvin Josten.

The family of Becky Sue Bull created this Life Tributes page to make it easy to share your memories.

Send flowers to the Bull family.