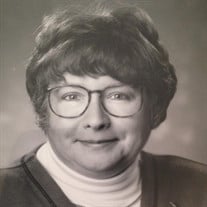 Barbara Jean Kellogg, 70, died peacefully surrounded by loved ones in her Mason City home on Thursday, February 4, 2021. A Graveside Service will be held 10:30am on Friday, June 4, 2021 at Memorial Park Cemetery, 11495 265th St, Mason City, IA. Memorials may be directed to the family at the address of 418 21st ST SE, Mason City, IA 50401. Barbara was born on July 18, 1950, the daughter of Robert Dunn and Marjorie (Bartlett) Dunn of Mason City, IA. She attended and graduated from Mason City High School in 1968. Barb continued her education at NIACC, and then attended UNI where she earned her Master’s in English. Barb became a successful and well-respected member of the community as well as throughout the state of Iowa in her endeavors to help others. The large impact she made in the lives of numerous people is priceless. Barb continues to be spoken of by colleagues, friends and the people she affected in so many ways. Barb was extremely proud of her service throughout the years to Habitat for Humanity as well as their Board of Directors, Family Connections Board of Directors, Youth Task Force, United Way. She volunteered for multiple years to help assist the North Iowa Fairgrounds Booth for The United Way, FaDSS, NIACC Alumni Advisory Board, Headstart, Iowa Workforce Development, Iowa Board of Public Health, IowaWORKS, Board of Commission for Mason City Housing Authority. Barb served on several committees for the State Agency and Association along with many other programs she was involved with that partnered with North Iowa Area Community Action Organization (NIACAO). Barb loved to read and had an amazing library of books. She also had a great love of crime dramas and mystery TV shows that would run almost 24/7 in the house. Barb had a great love for music and even played the xylophone during her years in the Mason City High School Symphonic Band. She loved art, eating exciting new foods, and enjoying quality time with family & friends. Barb was so pleased to pass some of these hobbies on to her children as well. Barb was loved dearly by her family & friends and will be remembered forever by those who knew her best as a gracious and giving person who had an unbelievable smile. She was a larger than life family member who was generous with her love, time, and personality. She will be greatly missed by all. Those left to cherish memories of Barbara are as follows: Barb’s Son Benjamin Kellogg along with his daughter Alexis Kenny her adoptive parents Laura & Brendan Kenny and adopted sister Rebecca Kenny; Barb’s Daughter Jennifer Kellogg & husband Colin Day along with their daughter Isabelle Day; ex-husband, Jim Kellogg & wife Donna Adams-Kellogg along with Barb’s Goddaughter Liz Hill & husband Jesse Hill and their son Winston Hill; sister-in-law Pattie (Rubalcava) Dunn; brothers, Roger Dunn & wife Nancy DiMarco Dunn, William Dunn & wife Molly Dunn; brother-in-law, Bob Kellogg & wife Paula Weitmon Kellogg; sister-in-laws, Deborah (Raab) Spruill & husband Jim Spruill, and Sherri (Raab) Jefferys; brother-in-law, Jerry Raab & wife Lori Raab; nephews, Jonathan Kellogg, Christopher Dunn, Eric Dunn, Michael Dunn, Tony Dunn, Nate Dunn, Jeffery Dunn; nieces, Amy (Dunn) Deines, Kimberly Kellogg Orr, Julie (Dunn) Broadhurst, Jessica (Spruill) Hurlburt, Angela Noel Spruill; as well as numerous extended family members and friends. Barbara is preceded in death by her parents, Robert and Marjorie (Bartlett) Dunn; brother, Jon Dunn; cousin, Larry Dunn; and her brother-in-law Bruce Jefferys. The family would like to thank the caregivers at North Iowa Hospice, the ALS Foundation as well as the many friends and family that have provided care along with support during this difficult time.

The family of Barbara Jean Kellogg created this Life Tributes page to make it easy to share your memories.

Send flowers to the Kellogg family.