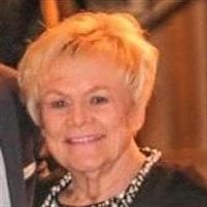 Barbara J. Dwyer, 89, of Clear Lake, was on in-home hospice when she entered into eternal rest on Monday, April 19, 2021, surrounded by family. A Celebration of Life will be held at 10:30 a.m. on Saturday, July 24, 2021, at Ward Van Slyke Colonial Chapel, 310 1st Ave. N., Clear Lake, with Rev. Dean Hess officiating. Inurnment will be at Memorial Park Cemetery in Mason City. Visitation will be from 5:00-7:00 p.m. Friday, July 23, 2021, at the funeral home in Clear Lake. Barbara Jean Sams was born on April 2, 1932 to Harold Leland and Esther Lavina (Harris) Sams in Sioux City, Iowa. She attended Sioux City Schools, where she was Valedictorian of her graduating class, after having survived and spending a year in bed with rheumatic fever. Following high school, Barb attended Morningside College and St. Luke's College of Nursing. This is where she would meet the love of her life, Jerry Dwyer, and marry him six months later. They met at a dance for nursing students and military men and it was love at first sight. They spent 64 years together until his death in January 2016. As soon as they married, they moved to Oelwein, Iowa, where Jerry and Barb opened up Dwyer Flying Service. They worked together and operated airports in Charles City, Mason City, and settled in Clear Lake, Iowa. They owned and operated Dwyer Flying Service, Dwyer Aircraft Sales, Inc. and Dwyair, Inc. in Minneapolis. Barb and Jerry had the unfortunate experience of having their airplane crash that took the lives of their pilot and passengers in 1959, with Roger Peterson, Buddy Holly, Ritchie Valens and JP Richardson on board. It was a very challenging time, but they end ended up being blessed in becoming close friends with the families of the deceased and enjoying many years making friends from all over the world at the Winter Dance Party, held at the Surf Ballroom each year. Barb and Jerry had four children born to their union: Jeffrey Jerome, Kim Alan, Kirk Martin, and Dawn Renee. They were partners for life and enjoyed spending time together. Whether out for dinner with friends, golfing, camping, spending time at their condo in Florida, or enjoying the fall colors along the Mississippi, they were inseparable. She especially enjoyed dancing with Jerry - as a featured couple in the “Dancing for the Dream” event at the Surf Ballroom! Later in life, Barb’s favorite outing was Taco Night at the VFW with her friends! Barbara accomplished much in life! She was a 60+ year member of Beta Sigma Phi Sorority, a member of the Clear Lake Women’s Club, where she served as President. She was a Clear Lake Chamber of Commerce First Mate for many years. Barb was recognized by the American Cancer Society and received State and National Recognition for her outstanding fundraising efforts for Cerro Gordo County’s Relay for Life. Barb was honored for being a Super Fan with the Clear Lake High School. Both she and Jerry enjoyed following the Clear Lake High School sports teams, loving on many of the young athletes! Barb was a member of the Clear Lake Women’s Golf Association. She enjoyed golfing with her girlfriends and was most proud of her HOLE IN ONE in the late 1970s! Barb is survived by her children, Kim (Suzy) Dwyer, Kirk Dwyer, and Dawn Southwick; grandchildren Michael Dwyer, Scott (Anna) Dwyer, Cory Dwyer, Matt (Lynne) Dwyer, Danielle (Derek) Adolf and Natalie Dwyer, Andrew (Angela) Dwyer and Alex Dwyer, Hillary Southwick, Harrison Southwick, and Halston Southwick; eleven great-grandchildren and another expected to arrive in September 2021; brother, Richard (Judy) Sams, and many cousins, nieces, nephews, and friends. She was preceded in death by her parents; husband, Hubert Jerome (Jerry) Dwyer; son, Dr. Jeffrey Dwyer; son-in-law, Douglas Southwick; brother and sister-in-law, Leland and Molly Sams; brother-in-law, The Very Reverend Martin James Dwyer and Sister-in-law, Becky Dwyer; sister-in-law, Mary Louise Cole, and a nephew, David Sams. Barb loved her family and especially her grandchildren. She will be remembered for her strong will, her spunk, her ability to live life on her terms - her fun way, without conforming to the world. Jerry and Barb danced through life - they did it their way!

The family of Barbara Jean Dwyer created this Life Tributes page to make it easy to share your memories.

Send flowers to the Dwyer family.