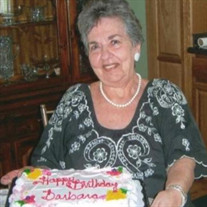 Barbara “Barb” A. Demaray June 13th, 1932 – February 10th, 2022 Barbara A. Demaray, age 89, of Northwood, Iowa passed away at MercyOne North Iowa Medical Center in Mason City, Iowa on Thursday, February 10, 2022. Per Barbara’s wishes her body has been cremated and the family will hold a memorial service at a later date. If friends would like to share a memory they are welcome to do so on Barbara’s “Barb’s” Tribute page on ColonialChapels.com Barbara was born in Shreveport, Louisiana, where she graduated High School and secretarial school. After marrying and having her first daughter, she moved to St Louis, Missouri. There she worked as an executive secretary for Monsanto Company and had her second daughter. From there she moved to Atlanta, Georgia, where she worked as an executive secretary for Lockheed Martin and had both of her sons. After living a short time in South Dakota, the next move was to Omaha. Barbara worked in the office of the Anesthesiology department at the University of Omaha Medical Center. Eventually, she landed in Clear Lake, where she worked as a secretary and office manager for a local property management company before relocating to Northwood. Barbara spent the last 27 years in Northwood making memories with friends and family. Barbara was a member of Mason City Seventh-Day Adventist Church and was active in the church and enjoyed her bible study classes. She was an avid collector and seller of antique dish-ware. Barbara enjoyed learning about antiques and sold her collectables in various antique stores throughout the area. She is survived by all four of her children, her daughter, Debra Demaray and her husband Billy, daughter, Michelle Demaray, and sons, Randy and Scott Demaray; four grandchildren, Kyle Wille, Sarah Andersen, Scot Hollander and Carter Demaray; and two great grandchildren, Cayden Wille and Teagan Wille. Barbara is preceded in death by her grandson Dustin Wille.

The family of Barbara Ann Demaray created this Life Tributes page to make it easy to share your memories.

Send flowers to the Demaray family.