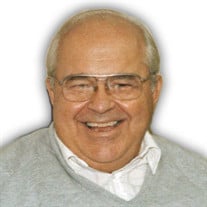 Arlo Movick, 87, of Mason City died Monday, October 18, 2021 at MercyOne North Iowa Medical Center. A Memorial Service will be held 11:00 a.m. Wednesday, October 27, 2021 at Trinity Lutheran Church, 213 North Pennsylvania Avenue, Mason City, IA 50401. Masks will be required for all attendees. Arlo will be laid to rest in Union Cemetery, Ottosen, IA. A live stream of the service may be found here: https://www.facebook.com/HoganBremerMooreColonialChapel/ Visitation will be held one hour prior to the service at the church. Memorial contributions may be directed to the Friends of the 457 or Trinity Lutheran Church. Arlo Wayne Movick was born March 27, 1934 in Ottosen, IA the youngest son of Peter and Clara (Ellingson) Movick. Growing up in Ottosen with his eight siblings, the family later moved to Mason City where Arlo graduated from High School in 1951. It was here he met Shirly Schinnow through a mutual friend, and were married on October 24, 1953 at Trinity Lutheran Church. The couple was blessed with five children, Debra, Michael, Jeffrey, David and Anne making their home in Mason City while Arlo worked at Deckers. Following Deckers’ closing, Arlo began working for Fleetguard and continued his education at NIACC. He worked for 27 years in Traffic Management/Freight Rates until his retirement in 1996. Arlo and Shirly were longtime members of Trinity Lutheran Church in Mason City. He eventually went on to teach the NIACC courses he had taken for Traffic Management and Freight Rates. Throughout the years Arlo was very involved with the Boy Scouts, eventually earning a Silver Beaver Award, which was the highest thanks given to a civilian. Over the years he collected hundreds of Boy Scout coffee cups from thrift stores and “junking” with his kids, all which are displayed at his home. Arlo was a very active part of the Friends of the 457, working to restore and volunteer at the M & St.L Engine #457 in East Park. Arlo looked forward to putting on his engineer hat and working on the train, showing the kids all the bells and whistles. He enjoyed Tuesdays with Jerry at the VFW and dinner at the Moose with friends. Arlo was always looking out for others. He was a kind, caring gentleman who became a father figure to many. Those left to cherish his memory are his wife, Shirly; his children, Debra “Deb” (Reed) Lucas of East Peru, Michael “Mike” Movick of Chariton, and Anne Marie (Brian) Miner of Mason City; grandchildren, Amber Movick, Teresa (Matt) Anderson, Rachael Lund, Sarah Miner, Katy (Shane) Gilge, Gabe Miner, Casey (Amy) Movick, Tanner Movick and Summer (Collin) Hughes; great-grandchildren, Alex, Abby, Eli, Kyle, Taylor, Evelyn and Evan; siblings, Bernard Movick, Darlene Oppedahl and Donna Gatton; Shirly’s siblings, Deanna Rague and Robert Schinnow; as well as numerous extended family members and friends. Preceding him in death are his children, David and Jeffrey Movick; a grandson, Justin Willis; siblings, Peter Movick, Nyle Movick, Marvin Movick, Ardis Opheim, and Mardel Landmesser; parents, Peter and Clara.

The family of Arlo Wayne Movick created this Life Tributes page to make it easy to share your memories.

Send flowers to the Movick family.