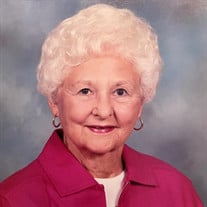 Filled with her abiding faith and zest for life to the end, Anne Elizabeth Goranson, 98, of Clear Lake, passed on to her eternal home on Monday, October 25, 2021. She died at MercyOne North Iowa Medical Center in Mason City from a heart attack. A memorial service will be held at 1:30 p.m. Monday, November 1, 2021, at St. John’s Episcopal Church, 120 1st St. NE, Mason City, with Rev. Stephen Benitz officiating. Masks will be required at the church. Anne’s service will be live streamed on the Ward-Van Slyke Colonial Chapel Facebook Page and later posted to Anne’s tribute at www.colonialchapels.com. Inurnment will be at Elmwood-St. Joseph Cemetery in Mason City. Visitation will be held from 1:00-3:00 p.m. Sunday, October 31, 2021, at Ward-Van Slyke Colonial Chapel, 310 1st Ave. N., Clear Lake. The family suggests memorial contributions to St. John’s Episcopal Church in Mason City. Anne was born November 16, 1922, the beloved daughter of Roscoe B. and Hermione Ayers in Iowa City. As a girl, she loved playing with friends outdoors and helping in her mother’s flower garden. She enjoyed singing in the school choirs and graduated from Iowa City High School in 1940. Anne attended the University of Iowa, where she was a member of the Pi Beta Phi sorority and where she met Frink Charles “Chuck” Lovell, Jr. They were married on June 27, 1944. Their first home was at an Army base until Chuck went overseas to serve in the Philippines during World War II. Anne returned to Iowa City to help with her parents and earn her bachelor’s degree from the university. After his honorable discharge from the service, they moved to Clear Lake where they began raising their three sons in their house on the lake. They later moved to Denver, Colorado and then to Shoreview, Minnesota where Chuck died on November 21,1964. Anne and her three sons later moved back to Clear Lake where she worked as a teacher’s aide and continued being a full-time mom. She actively participated in her sons’ activities, including as a Cub Scout den mother and even took her sons on a camper trailer trip vacation to South Dakota. She enjoyed cooking for her family and trying some non-traditional foods such as fondue (before it became the craze), cow tongue (which was healthy, but never became a craze), sukiyaki (Chuck enjoyed this while in the service) and southern grits. In 1970, Anne and Donald “Bud” Goranson of Clear Lake got married, making theirs an even busier household with six boys. One of Anne’s priorities, though, was to always provide nutritious, flavorful meals for her family to enjoy around the dining table every evening. Their home was for years the site of annual Fourth of July parties and became the holiday gathering place for their much loved children and grandchildren. Anne and Bud celebrated their 50th wedding anniversary in 2020. Anne was a member of St. John’s Episcopal Church in Mason City and a founding member of the St. Andrew’s Mission Church in Clear Lake where she served as a Sunday School teacher and was on the Altar Guild. After the boys started heading off to college, she was a longtime volunteer at the North Iowa Medical Center in Mason City and served on its Foundation Board of Directors, was a 20th Century Club member and a member of the “Bookies” book and coffee club. She planted and nurtured beautiful flower gardens at her homes in Clear Lake, enjoyed traveling with Bud and friends, and following the Iowa Hawkeyes. She also loved entertaining friends, especially with elegant, gourmet dinners. As she became less physically active in recent years, she treasured watching activity on the lake with each seasonal change and identifying the birds at her feeders. She still greeted everyone with her vibrant smile and enjoyed sharing a good laugh. Being able to hold great grandbabies was such a joy. Even at age 98, she still loved to learn new things and cared about how others were doing, including her caregivers or anyone helping at the house. As one repairman said this week,” …I always felt so much better after leaving their home when I was doing service work there.” Ever the optimist, she also shared that it was her steadfast faith that got her through life’s challenges. The day before she passed on, she gave the blessing at the dining room table as she often did after Bud had passed on. “Oh Lord, bless this food to our use, and us to thy service and make us ever mindful of the needs of others. In Jesus name, we pray. Amen.” And she added, “We need to always be mindful of the needs of others, each and every day.” Anne is survived by her sons and daughters-in-law, John and Janet Lovell, Steve Goranson and Marcia Jensen, Tom and Jan Lovell, Dan Goranson and Kimberly Darling, Jim and Janis Lovell; grandchildren and their spouses and partners Travis and Corie Klein, Maura Klein and Brandon Sturgill, Emily Klein and Wes Peetz, Sara Goranson and Nick Schulz, Jenessa Jensen and Drew Coursin, Emily Goranson and Niki Heber, Paul and Kim Goranson, Tim and Melissa Goranson, Katie and Ross Stedman, Beckie and Jacy Dillahunty, Chris and Morgan Lovell and 14 great-grandchildren. She was preceded in death by her parents; husbands; brother, Roscoe B. Ayers, Jr.; and a son, Joseph Goranson. The family expressed deep gratitude to the caregivers who made it possible for Anne to remain in her home.

Filled with her abiding faith and zest for life to the end, Anne Elizabeth Goranson, 98, of Clear Lake, passed on to her eternal home on Monday, October 25, 2021. She died at MercyOne North Iowa Medical Center in Mason City from a heart attack. A... View Obituary & Service Information

The family of Anne Elizabeth Goranson created this Life Tributes page to make it easy to share your memories.

Filled with her abiding faith and zest for life to the end, Anne...

Send flowers to the Goranson family.